In addition to launching new smartphones and tablets this week, Alcatel OneTouch is unveiling some new smartphone accessories including an inexpensive smartwatch.

Engadget reports the watch will sell for just  €99, or about $130, although it’s not clear when it will be hit the streets or what markets it will be available in. 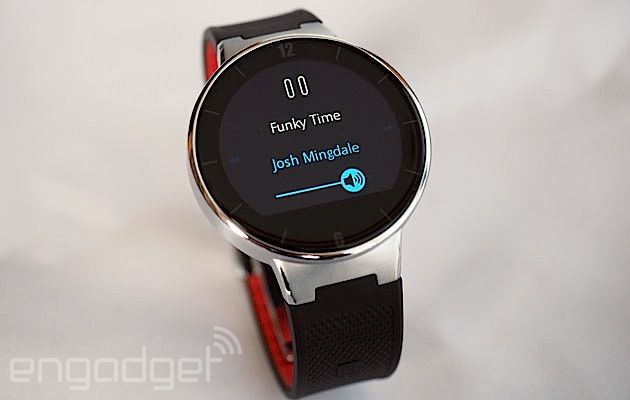 The watch has a round face that makes it look more than a little like Motorola’s Moto 360. But the Alcatel OneTouch smartwatch doesn’t run Google’s Android Wear software.

Instead it has its own operating system and it’s designed to pair with a smartphone to display notifications, let you control music playback, act as a shutter control for your camera, or choose from a variety of custom watch faces.

The watch has a USB charger built into the wrist strap.

Alcatel OneTouch is also working on a Motorola Lapdock-like laptop dock for its smartphones. The idea is that you could connect your smartphone to an 11.6 inch laptop shell via NFC in order to interact with your Android apps on a bigger screen while using a keyboard and touchpad.

The dock is called a SmartBook and it’s still a work in progress. The company hasn’t even decided whether to bring it to market yet, but if it does come to market later this year it’s expected to sell for €179, or about $230 US.