Samsung will probably introduce the Galaxy Note III in the next month or so, but Samsung isn’t the only company offering big phones with support for handwritten notes or doodles. Alcatel’s upcoming OneTouch Scribe Pro is a phone with a huge screen and a stylus. 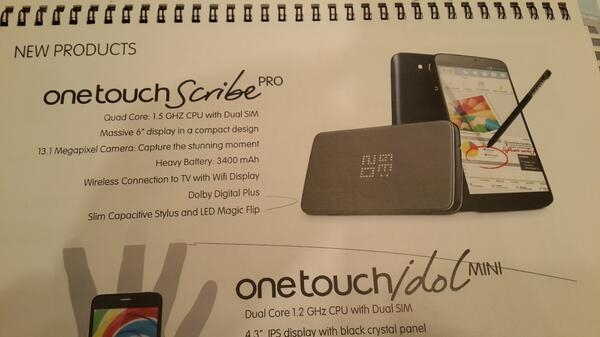 Eldar Murtazin leaked some details about the phone this week, and says it’ll be available in Hong Kong this month for about $300 (without a carrier subsidy).

The phone’s expected to have a 6 inch display, an unspecified 1.5 GHz quad-core processor, a 13.1 megapixel rear camera, and a 3400 mAh battery which should provide reasonably long run time.

The OneTouch Scribe Pro comes with a capacitive stylus. That means you can use it instead of your fingers to write, draw, or tap on the screen, but it won’t offer the same kind of pressure-sensitive input for fine shading as as you get with an active digitizer and a digital pen.

According to the leaked specs, the phone also features Dolby Digital Plus audio, wireless display support for connecting the phone to a TV, and an “LED Magic Flip” cover which can display the time even while your screen is protected.

It’d be nice to know exactly which processor the phone has, or what the display resolution will be. But with a street price of $300, the Alcatel OneTouch Scribe Pro could be an affordable alternative to Samsung’s next-generation Galaxy Note.