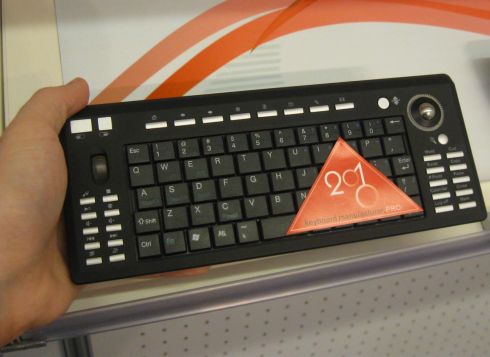 Tablets were everywhere at CES this year. NVIDIA had them, Freescale had them, dozens of Asian companies had them, and the Notion Ink Adam tablet was one of the most hyped products of the show. And many of the tablets showed a lot of promise as portable media players and web surfing tools. But call me old fashioned, but I still like a physical keyboard for writing email, leaving blog comments, or even just entering a URL.

But just because there’s no keyboard built into the tablet doesn’t mean that you can’t use a keyboard with a tablet. Most of these devices have USB ports, and that’s pretty much all you need to plug in a full sized or portable keyboard. I stopped by the Aisonic booth at CES last week where I spotted a ton of USB and wireless mini-keyboards in all sorts of sizes and shapes.

One of my favorites is the one above, which has an integrated trackball which would make it a perfect Home Theater PC remote control/keyboard. But the company also has a number of keyboards ranging in size from “disappears into your hand” to “nearly full sized.” Some of the cheapest looking USB keyboards appear pretty flimsy, but some of the fancier ones seem like they’d be sturdy enough to throw in your shoulder bag and carry around with your tablet.

You probably won’t see any of these mini-keyboards sold under the Aisonic brand name in the US. The company is looking for international distributors for its products.

Now if only there were more tablets with built-in kick stands so you could prop them up easily while typing on a USB keyboard.