When DISH Network unveiled its new AirTV box at CES a few weeks ago, the company promised it would blur the lines between online video and broadcast TV by allowing you to connect an antenna and view guide data for over-the-air channels in the same user interface as the Sling TV internet video service (which is owned by DISH).

But as Zatz Not Funny reports, that combined user guide data feature isn’t available yet. Instead, there’s just a button that lets you launch a separate Live Channels app for viewing broadcast TV from your antenna. 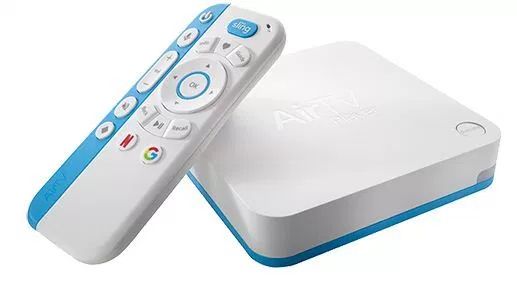 Sling TV CEO Roger Lynch says that the combined program data is coming soon, and that the feature which was shown off at CES was part of a beta version of the AirTV software.

What’s a bit odd is that the company was showing off beta software for a brand new box, and then shipping it with different software. You’d think DISH could have just waited until the new software was out of beta before shipping the box at all.

That said, AirTV is still far from useless. It’s a 4K video player with 802.11ac WiFi, Bluetooth, and a Bleutooth remote control with a microphone for voice controls. AirTV runs Google’s Android TV software and comes with Netflix and Sling TV apps pre-installed. And customers get $50 in Sling TV credit when they buy an AirTV box.

The standalone box sells for $99. But you can also pay $129 for an AirTV and adapter bundle that lets you hook up an external antenna. You’ll just need to wait a while for combined program data if you choose the latter option.