Developer Koushik Dutta has been busy developing a series of apps that lets you stream all sorts of content from an Android phone to a Google Chromecast. Now he’s released a test version of an app called AirCast which lets you stream videos from the Android gallery app, Dropbox, or Google Drive to your TV using a Chromecast.

There’s a catch: right now only an early build of AirCast is available for bug testing. You can try it out, kick the tires, and report bugs — but the app will stop working in a few days. Hopefully we won’t have to wait long for a longer-term solution.

Update: It looks like Google has other plans for the Chromecast. The company has released a software update that kills support for local video streaming of this sort. 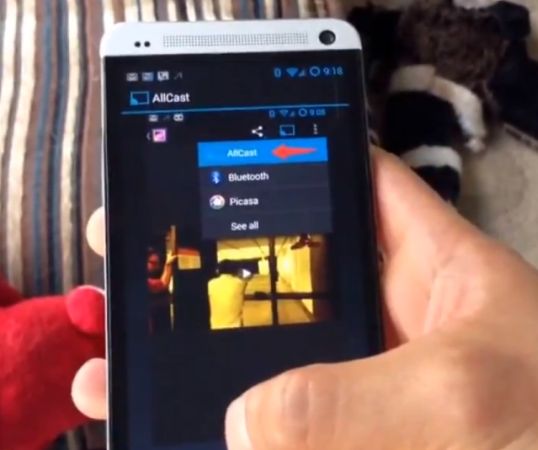 Out of the box Google’s Chromecast device lets you stream content from a handful of Android apps including YouTube, Netflix, and Google Play Movies. When you find a video to watch on your phone and tap the Chromecast button, you’re actually sending a command to the $35 media device to start streaming that video directly from the internet, not from your phone or tablet.

What Koush’s app does is let you send video stored on on your phone to your TV over a local network. Or you can stream music, videos, or other content that you’ve uploaded to a cloud storage service including Google Drive and Dropbox.

Koush actually demoed this a few weeks ago — and plans to offer an app via Google Play and also work with the CyanogenMod team to let users stream content from any app on their Android phone or tablet to a Chromecast. But he’s releasing the first test builds of AirCast now because he’s reverse engineered the Chromecast protocols to let you stream content without using Google’s Chromecast or MediaRouter SDKs, which lets him distribute his app freely.

Once you fire up a video, you can control it with your mobile device just the way you would a YouTube or Netflix video.

Note that this is an early build, and it may not work on all devices — the Gallery app on the HTC One, for instance, isn’t supported as of 8/18/2013.

3 replies on “AirCast: Stream videos from Android Gallery, Drive, or Dropbox to Chromecast”