As tech components get smaller and smaller, you can cram a lot of things into a tiny space. A few days ago I highlighted a new mini-desktop computer that also has a 7 inch touchscreen display and battery that lets you use it like a tablet… and a built-in projector that lets you display movies, presentations, games or anything else on a screen.

But Aiptek has a different solution: The iBeamBlock a modular system that lets you buy just the components you need. There’s a projector, a mini PC/tablet with a built-in touchscreen display, and a battery. They can be stacked on top of one another and they communicate via Pogo pins. And you can buy all three together or just the components you need. 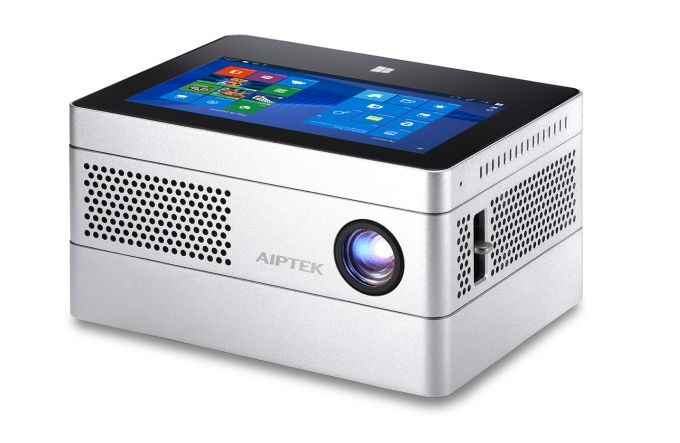 Aiptek has been showing off the iBeamBlock for a few months, but the company is expected to showcase it at the IFA trade show in Berlin this fall, and it should be available for purchase soon. The suggested price for all three components combined is 699 Euros, while the projector itself will be available for about 499 Euros.

The advantage of this sort of modular system is that if you don’t need a battery you don’t have to buy it. Even if you do have all the pieces, you can leave some at home or at the office if you don’t expect to need them on the go.

On the other hand, the system would be a lot thicker and heavier than something like the Sunty SP-001.

The Aiptek Projector L400 has a native resolution of 1280 x 720 pixels, offers up to 720 lumens of brightness, casts an image up to 120 inches, and supports input via HDMI or Pogo pins, so you can use it with Aiptek’s mini PC or with other devices.

There’s a 4.5 inch multitouch IPS display on the top, 802.11b/g/n WiFi and Bluetooth 4.0 supports, and USB and Pogo pins for connecting peripherals. The mini PC weighs about 6 ounces.

The PB-10 battery is a 3.7V, 12,000 mAh battery that should offer up to two hours of projection time or longer run time when used just with the tablet/mini PC component. The battery module weighs just under a pound.

Overall, the system reminds me of Lenovo’s ThinkPad Stack system, except Aiptek’s projector should be brighter and ThinkPad Stack accessories are all designed to be used with a separate computer, while the iBeamBlock comes with an optional computer of its own.