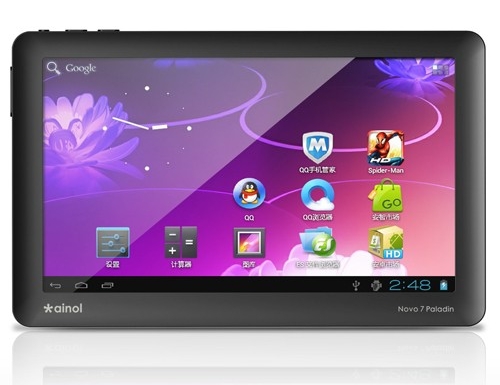 Remember that $100 tablet with a MIPS processor and Google Android 4.0 Ice Cream Sandwich? It looks like the retail price is going to be closer to $120 in the US, but that still makes this Android 4.0 tablet cheaper than most devices running Android 2.3 and earlier.

PandaWill and Merimobiles are both taking pre-orders for the Ainol Novo7 Paladin tablet for $119.99.

The tablet has a 1 GHz JZ4770 Xburst MIPS processor and a Vivante GC860 graphics processor with support for 1080p HD video playback.

This isn’t exactly a top of the line tablet. It has a low resolution 800 x 480 pixel display, for instance. But it has a capacitive touch panel with support for 5-point multitouch, 512MB of RAM, 8GB of storage, and a microSD card slot for expansion. It also supports Adobe Flash content, comes with the Google Andorid Market, and has a g-sensor.

Now the Google has officially given its blessing for device makers to install Android 4.0 on phones or tablets, it looks like the inclusion of the Android Market and other Google apps such as Gmail and Google Maps may no longer be restricted to high-end tablets.

In other words, the lines between $500 tablets and $120 tablets are about to get thinner. But if I were in the market for a new tablet, I’d probably still look for one with a fast processor, decent build quality, and a high resolution display. 1GB or more of RAM is also nice to have, but not essential, as the Amazon Kindle Fire has demonstrated.

Update: Like the Skytex Primer Pocket I reviewed earlier this year, it appears the Ainol Novo7 Paladin may have trouble running some Android apps that aren’t compiled for MIPS processors. I’ve seen conflicting reports about how extensive this problem is, but several readers that have used an Ainol Novo7 have written in to explain that many Android apps simply won’t run on the device.