The Eve V is a surprisingly good tablet from a company that took a very unusual approach. Not only did Eve Tech raise money through a crowdfunding campaign, but the scrappy young company turned to potential customers for input on nearly every important design decision.

While that could easily have led to a too-many-cooks-spoiled-the-tablet situation, or a niche device that would have limited appeal, the tablet Eve Tech sent me to review in late 2017 was actually a really, really good machine.

Unfortunately it’s never been particularly easy to get your hands on one. After running a successful Indiegogo campaign, Eve held a flash sale before eventually starting to sell the tablet outright via its website.

But a glance at the Eve Community forum makes it clear that many customers are seeing long shipping delays, having problems getting refunds, and generally expressing their concern about the viability of the company.

Eve Tech officials have done a little to explain the situation, but as good as the Eve V tablet is, you should probably know what you’re in for before ordering one today. 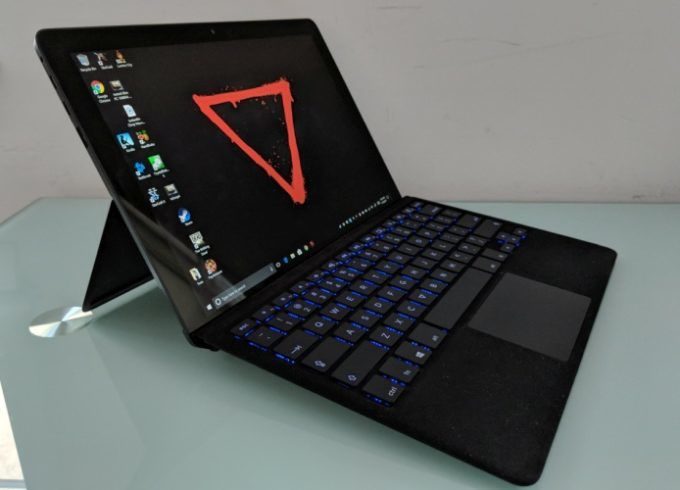 Earlier this month Eve Tech founder and CEO Konstantinos Karatsevidis tried to address customer concerns. In a nutshell, he said that the company is continuing to ship tablets… but that as of July 6th only about 65 percent of orders had been fulfilled so far.

A big part of the problem? After Eve Tech raised over $1.4 million through a crowdfunding campaign, the company transferred the funds to a PayPal account… and PayPal froze the funds due to what looked like suspicious activity. This isn’t the first time PayPal has done this sort of thing to a relatively high-profile user.

Karatsevidis says the company does have components to assemble more tablets, but since funds are only being unfrozen a little bit at a time, it’s slow going.

Meanwhile, the company is promising to issue refunds to customers who are tired of waiting… but that’s hard to do without funding as well. So the company has been seeking outside investment to augment the money that’s being tied up by PayPal.

Since the July 6th update, Eve employees have been posting weekly updates in the Eve Community forum, but for the most part they say something along the lines of “no change to report.” The latest update does suggest that the team is working on improving communication with customers, and dealing with shipping, replacement, warranty, and refund issues more quickly.

With a backlit, detachable Bluetooth keyboard, an active, pen, a speedy SSD, an excellent high-resolution display, and other top-tier specs, the Eve V is still a pretty great tablet… if you can get your hands on one. If you were thinking of ordering an Eve V tablet today, you might want to wait until the company is on better financial footing before pulling out your wallet.

Meanwhile, Intel’s next-gen Amber Lake-Y processors set to launch soon, the tablet won’t have best-in-class hardware for much longer. That could make the Eve V an even tougher sell… and it’s not entirely clear at this point if or when Eve Tech will be ready to launch an Eve V II (or Eve VI, or Eve W, or whatever the next in line would be).

thanks for the tip, eve_v_review!

22 replies on “After making a terrific tablet in 2017, Eve Tech is having trouble shipping units and supporting customers”