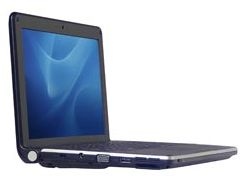 If the Advent brand name sounds familiar, that’s because the Advent 4211 was one of the first MSI Wind clones to pop up in the UK.