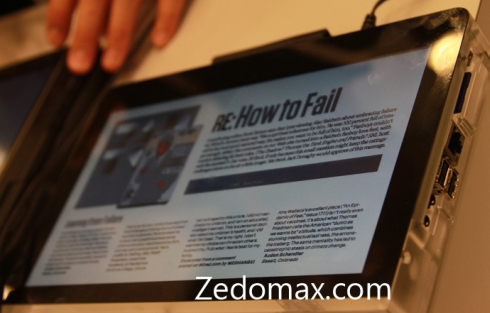 It’s no surprise that Adobe has been working on bringing support for Flash and AIR  to the Google Android platform. But the company isn’t just hoping that smartphones like the Google Nexus One will be able to handle Flash video, games, and apps. The company is also working with a tablet prototype. According to the folks at Zedomax, AIR and Flash run very well on the tablet.

There aren’t any details about this particular tablet, so we don’t know what kind of CPU or memory it has. And it’s not at all clear if this particular tablet will ever see the light of day, or if it’s just something Adobe is using for testing purposes. But at least it shows that it’s possible to run Flash on an Android device with a decent sized screen.

You can check out a video of the tablet navigating a Flash-based Wired Magazine app below, as well as a video showing YouTube video playback on the tablet. There are more videos available at Zedomax.