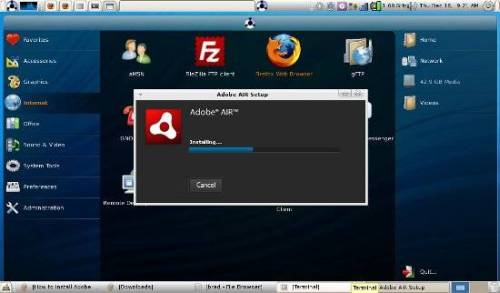 Adobe has announced plans to drop support for desktop Linux in the next version of the Adobe AIR platform, instead focusing its resources on Windows, Mac, and mobile platforms such as Android, BlackBerry Tablet OS and iOS.

AIR is a runtime that allows developers to write apps using the same tools used for Adobe Flash web apps, but AIR apps can run natively on a computer or mobile device. A few years ago when AIR first hit the scene, it seemed like a promising new platform that allowed developers to write apps that could run on Windows, Mac or Linux computers without any modifications. But it’s been a while since I’ve run across any must-have desktop apps written in AIR, so I’m not sure how much I care that Adobe is dropping support for desktop Linux operating systems.

Despite pundits claiming every year for the past decade or so that this will be the year of desktop Linux, the platform has continued to trail as a distant third behind Windows and OS X. That’s not even taking into consideration the fact that there are hundreds of different versions of desktop Linux.

On the other hand, mobile operating systems such as Android and iOS are on the rise — and the Adobe AIR platform makes it possible for developers to write mobile apps that will run on a variety of these devices. In fact, AIR is one of the key development platforms for the new BlackBerry Tablet OS (although if desktop Linux doesn’t have a lot of users, the BlackBerry PlayBook has even fewer).

I know from server logs and from the long history of Linux and netbooks that Liliputing readers are more likely than most to be active Linux users. What do you think? Do you care that Adobe is officially dropping support for AIR? Did you ever use it in the first place?

Adobe will offer tools that will allow its partners to port AIR to Linux, so this might not be the end. But the company won’t be putting any more of its own resources into developing Adobe AIR or the AIR SDK for Linux.

11 replies on “Adobe AIR is dropping support for desktop Linux: Do you care?”