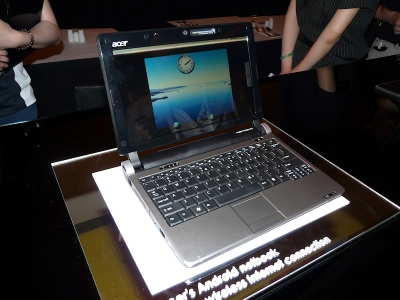 Acer is the biggest computer company to come right out and say it would ship a netbook running the Google Android operating system this year. The top 5 computer maker has already said it would have an Android netbook available by the third quarter of 2009. And Acer is showing off a demo of Android running on an Aspire One D250 at Computex. But Android is still a new mobile operating system, and it’s virtually untested on netbooks. So it looks like Acer is hedging its bets. The first Acer netbook to run Android will also dual boot Windows.

Acer chairman JT Wang basically says that consumers are familiar with Windows, which makes a dual boot system a much safer bet. If it turns out there’s a large demand for cheaper Android-only netbooks in the future, Acer will be happy to accommodate.

So the question is, if you were to purchase a netbook that can boot into either Windows or Android, would you ever use Android? Sure, the operating system will boot a little faster. But for the time being there are far more applications available for Windows than for Google Android.