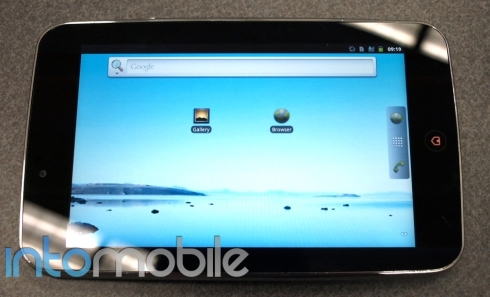 Acer plans to launch 7 and 10 inch Android tablets in the not-too-distant future. I got a chance to check out the company’s 10 inch model with an NVIDIA Tegra 2 chipset at CES earlier this month, but I didn’t see the 7 inch version. Fortunately the folks at IntoMobile did, and they’ve posted some hands-on photos.

The tablet will be powered by a dual core 1.2GHz Qualcomm Snapdragon CPU. At launch it will run Android 2.3, but eventually it should be able to run Android 3.0 Honeycomb. It has a 7 inch, 1280 x 800 pixel display. There’s a rear-facing camera with an LED flash and a front-facing camera for video chat.

The sides of the tablet are decked out with a fair number of ports for things like a SIM card, HDMI output, a mini-USB cable, and some sort of a docking cable connector… or something.

There’s only a single button on the front of the tablet, and it’s a Home button. You won’t actually need a Home button once Honeycomb arrives, since the OS is designed for touchscreen-only input. And with Android 2.3, you kind of need Back and Menu buttons, which makes me wonder if it even makes sense to release the tablet before Honeycomb is available.

There’s no word on price or availability yet.