There might be such a thing as too many pixels… at least when it comes to Windows laptops. Companies have been duking it out to see who could pack the most pixels into smartphone and tablet displays, and Apple’s latest 13 and 15 inch MacBook Pro laptops also have “Retina” displays.

But those phones, laptops, and tablets generally take advantage of those extra pixels to keep text, pictures, and other graphical elements the same size… while looking sharper. Microsoft Windows 8 does the same thing… but only when you’re using the new “modern” user interface.

When you jump back into the traditional Windows desktop, a higher resolution display means you can fit more content on the screen. And that’s a great thing if you have a large display. If you have a small display… it can make it hard to see anything on the screen. 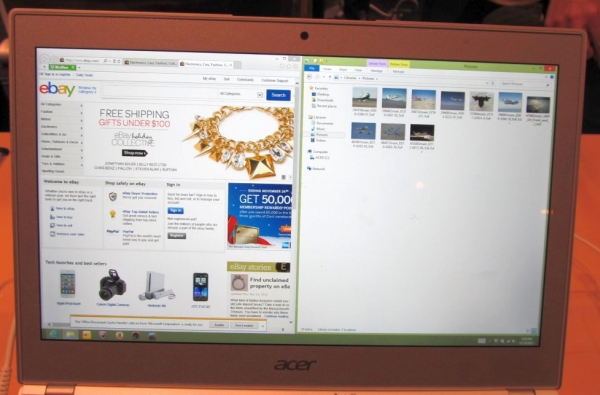 On the one hand, the display looks great when you’re viewing the Start Screen or apps designed for the new modern UI.

When you try to run a desktop web browser, on the other hand, everything looks very, very tiny. If you don’t plan to hold the laptop as close to your face as you typically hold a smartphone, that could be a problem.

Fortunately, the 1920 x 1080 pixel screen looks a lot better on larger Series 7 ultrabooks. Acer also offers a model with a 13.3 inch screen, and it’s just enough larger that the higher resolution display feels a little easier to use.

In a perfect world, Microsoft (or Acer or another hardware partner) would come up with a way to do what Apple’s done on its latest MacBooks: use pixel doubling tools so that everything looks sharper and more clear on a laptop with a high resolution display, without necessarily looking smaller.

But it’s not clear whether that’ll happen anytime soon… so while it’s nice to have the option of a 1080p screen, if you’re thinking of picking up an ultrabook with a full HD display, I’d recommend checking it out in person before pulling out your wallet. You want to make sure that you can read comfortably on the display.

Acer’s 11.6 inch and 13.3 inch ultrabooks are available with up to an Intel Core i7 Ivy Bridge processor, USB 3.0, and a solid state disk. The notebooks weigh less than three pounds and have touchscreen displays with edge-to-edge glass.

The smaller model features 2 USB ports and a microSD card slot and micro HDMI port, while the larger model has full-sized ports including 3 USB ports.