Acer is refreshing its convertible laptop lineup with two new members of the Acer Spin family.

Acer’s new Spin 3 SP513-54N should be available a little sooner. It’s coming in April for $699 and up, and features a 14 inch, 1920 x 1080 pixel display with a 16:9 aspect ratio. This model’s also a little heavier and gets a little less battery life — those are some of the reasons for the lower starting price. 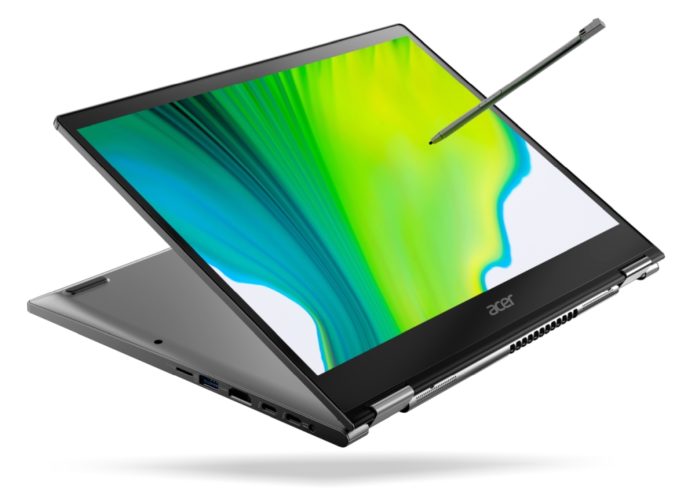 Both laptops feature 10th-gen Intel “Ice Lake” processors with support for up to Intel Iris Plus graphics, and both feature Thunderbolt 3 ports, WiFi 6, and Wacom pens with 4096 levels of pressure sensitivity and support for fast charging.

Both laptops also support fast charging — Acer says the Spin 5 should get up to 15 hours of battery life on a charge, while the Spin 3 tops out at 12. But plugging either in for 30 minutes should give you up to 4 hours of battery life. Take those battery life estimates with a grain of salt though — like most PC makers, Acer tends to be fairly liberal with those numbers. Real-world run time will likely be much lower.

And both laptops feature 360-degree hinges, touchscreen displays, support for up to 16GB of RAM and feature stereo speakers and dual microphones. But there are some key differences.

It will be available with up to an Intel Core i7-1065G7 Ice Lake processor, 16GB of LPDDR4X memory, and 1TB of PCIe NVme storage.

Other features include a fingerprint reader and active pen support — Acer will offer a choice of Wacom AES 1.0 or Wacom AES 2.0 pens (the cheaper Spin 3 only supports AES 1.0 technology)

The more affordable Spin 3 is a bit thicker and heavier, at 0.67 inches (16.9mm) and 3.31 pounds. It has an aluminum body and a lower-resolution display. But it does have one feature the Spin 5 lacks — support for dual SSD storage.

Acer will offer this model with up to an Intel Core i5-1035G4 processor, up to 16GB of LPDDR4X memory, and up to 1TB of PCIe solid state storage.

The new Spin 3 laptop is powered by a 48 Wh battery and supports a pen input when used with an Acer Active Pen.