Acer is updating its business-class laptop family with a new Acer TravelMate P6 laptop that was co-engineered with Intel as part of the Project Athena initiative, and the new TravelMate P2 laptop, which comes with a choice of 14 inch or 15.6 inch displays.

All of the new laptops are powered by 10th-gen Intel Core processors, ship with Windows 10 Pro software, feature TPM 2.0 modules, and comply with the MIL-STD-810G standard for durability.

The laptops will be available in North America starting in February, with TravelMate P2 prices selling for $700 and up and the TravelMate P6 starting at $1150. 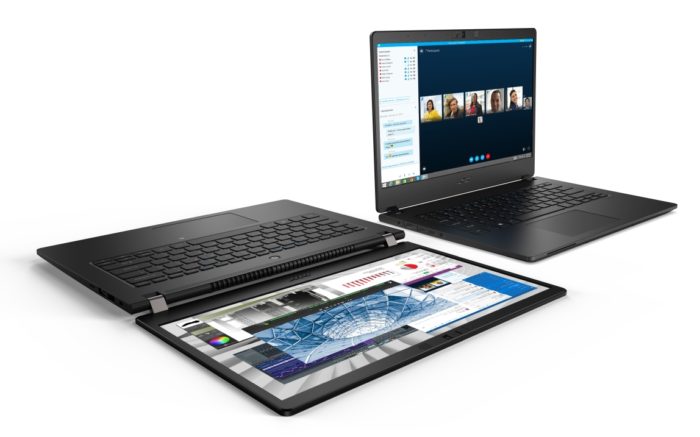 This model is a thin and light laptop with a magnesium-aluminum alloy chassis. It measures 0.6 inches thick and weighs just 2.4 pounds, but Acer says it offers up to 23 hours of battery life (take that with a grain of salt), and supports fast charging, so you can get a 50-percent charge by plugging in the laptop for 45 minutes.

The TravelMate P6 features a 14 inch display, support for up to an 10th-gen Intel Core i7-10510U processor, up to 24GB of DDR4 memory (with 4GB or 8GB soldered to the motherboard), and up to 1TB of PCIe NVMe solid state storage.

The laptop has a 180-degree hinge that lets you fold the screen down flat. It has a fingerprint sensor and IR camera for Windows Hello-compatible biometric logins. And the TravelMate P6 has a four-mic array that can pick up your voice from up to 6.5 feet away when you’re using the notebook for video conferencing or voice assistant software.

It supports WiFi 6, Bluetooth 5, and NFC, and the laptop has a SmartCard reader.

While these laptops have lower starting prices, they still include some business-friendly features including the MIL-STD-810G compliant design, optional support for 4G LTE, and Windows Hello compatibility thanks to fingerprint readers and IR cameras.

Acer only promises up to 13 hours of battery life for the TravelMate P2 (again, take that with a grain of salt), which is a lot less ambitious than the claims for its pricier sibling.

But this model does actually have a few advantages over the TravelMate P6 — it supports up to 32GB of DDR4 memory and is available with dual drives including up to a 1TB hard drive and 512GB solid state drive.

The TravelMate P2 will be available with up to a 10th-gen Intel Core i7-10510U processor with optional NVIDIA GeForce MX230 graphics and the laptop also has HDMI, VGA, and USB-C ports. And the 15.6 inch model has a numeric keypad.

Other features include WiFi 6, Bluetooth 5.0 Gigabit Ethernet, and a 48 Wh battery.