The latest Acer Chromebook 15 is a relatively low-cost laptop with an Intel Apollo Lake processor, a 1920 x 1080 pixel display, at least 4GB of RAM, and at least 32GB of storage. It’ll be available this summer for $349 and up.

Acer is also introducing its first convertible Chromebook with a 15.6 inch display: the Acer Chromebook Spin 15 has similar specs, but it has a 360 degree hinge, a touchscreen display, and a $449 starting price.

Both models should be available in North America in July, but they’ll launch in June for the EMEA (Europe, Middle East, and Africa) region. 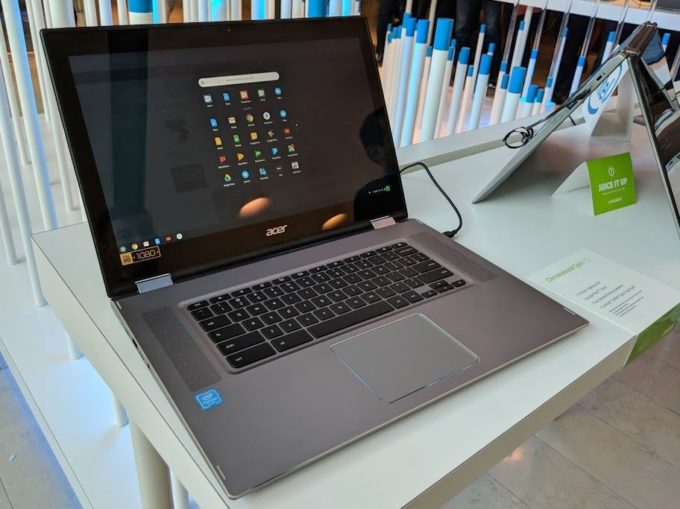 Both have 1080p IPS displays, and Acer says there’s an option to pick up the non-convertible model with a touchscreen, although it’s unclear if that option will be available in all regions.

While the non-convertible model doesn’t have a 360-degree hinge, it does have a 180 degree hinge, allowing you to fold the screen flat.

Both support 802.11ac WiFi and Bluetooth 4.2, both have 720p webcams with HDR support. And while there are a few difference in the port arrangement, both models have USB Type-A and Type-C ports (for data and charging), microSD card readers, and headset jacks, as well as top-facing stereo speakers on the left and right sides of the keyboard.

Oh, and both models also have massive bezels… which is a shame, because clearly the company knows how to make laptops with slim ones.