The Acer Jade Primo is a smartphone designed to run Windows 10 software. It’s also one of the first phones that’s expected to support Microsoft’s Continuum for phone feature. This lets you connect an external keyboard, mouse, and display to use your phone like a desktop computer.

Microsoft has two Lumia phones with support for Continuum on the way. They should be available in November with prices starting at $549.

But Acer’s Jade Primo might be cheaper: Semicurrent reports the company has announced that the Jade Primo be available in the Philippines in December for about just over $400. 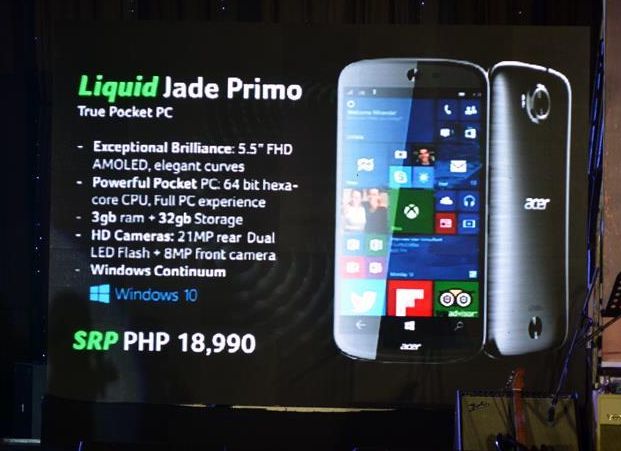 When you connect a supported phone to an external display, Continuum will provide a desktop-like user interface. The Start Screen becomes a Start Menu. There’s a desktop and taskbar. And apps take advantage of the extra screen real estate to display multi-column views.

There are some limitations. Right now Continuum for phone only allows you to view a single full-screen app at a time. And you’ll only be able to use Universal Windows Apps, which means legacy Windows programs that haven’t been converted into Windows Store apps won’t run.

That said, Continuum does present some interesting features. You can use connect your phone to a desktop dock, for instance, and edit Office documents on a big screen using keyboard and mouse shortcuts. While you’re doing that, you can still take calls, respond to text messages, or even surf the web on your phone. The phone continues to function as a phone even while it powers your desktop experience.

Microsoft will begin rolling out Windows 10 software updates to older phone soon, but none of those phones have the hardware to support Continuum. But it looks like you may not need to spend all that much money to buy a phone that does have the right hardware.

In the Philippines, Acer is reportedly going to charge 18,990 PHP, which is about $408. It’s not clear if that price includes the desktop docking station, (although Acer is expected to offer a desktop bundle in at least some markets), and it’s also not clear if the phone will cost more (or less) in other markets. But the price makes this phone very competitive with other recent smartphones: it’s cheaper than a 32GB Google Nexus 5X, for instance.