Acer is best known as a PC company, but for the past few years the company has been taking small steps into the smartphone space, and now Acer has announced that it will begin selling phones in the United States.

The Acer Liquid M220 is a low-cost Windows phone that will be available from the Microsoft Store in June for $80. 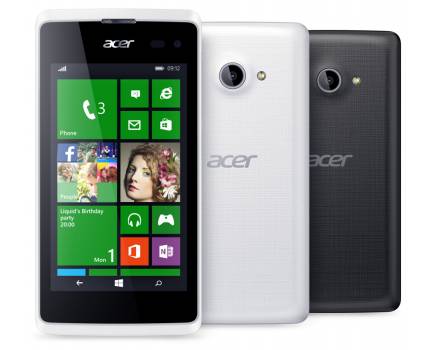 For that price you probably shouldn’t expect a lot… because you won’t get it. The smartphone features a Qualcomm Snapdragon 200 processor, 1GB of RAM, 8GB of storage, a 4 inch, 800 x 480 pixel display and a 1,300 mAh battery.

But it’ll ship with Windows Phone 8.1, get a Windows 10 software update when Microsoft releases the next version of its smartphone operating system, which means you get Office, Cortana, and other Microsoft apps and services.

The phone supports 802.11n WiFi. Bluetooth 4.0, and has a microSD card slot, a 5MP rear camera with auto-focus and LED flash and an 89-degree wide angle lens, and a 2MP fixed-focus front camera.