Acer is launching a new line of laptops aimed at creative professionals this summer. It’s called ConceptD, and the concept came together after Acer realized that a lot of people who were buying the company’s gaming PCs were using them for non-gaming activities including image and video editing.

So the Acer ConceptD line of computers pack the sort of high-performance hardware you’d expect to see in gaming laptops and desktops, but add features like low-noise fans, more professional looking bodies, and features like pen support — in fact the weirdest device in the lineup is the ConceptD 9 which has an easel-like design that allows the screen to fold out over the keyboard while you work with a pen.

But the most Liliputing-friendly model is probably the ConceptD 5, so let’s start our tour with that laptop. 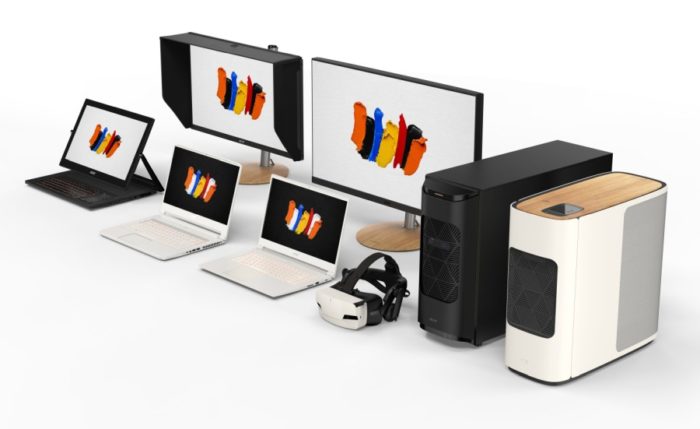 Under the hood, the computer is powered by an Intel Kaby Lake-G processor, which combines an 8th-gen Intel Core CPU with AMD Radeon Vega graphics: Acer will offer Core i5-8305G or Core i7-8705G processor options.

While the Kaby Lake-G chips are about a year old at this point, there aren’t a lot of computers on the market that use these processors, so it’s interesting to see a new laptop with the chips… even if the ConceptD 5 is the least powerful computer in the new ConceptD family.

The good news is that with a starting price of $1700, it’s also the cheapest product in the family.

The computer supports up to 16GB of dual-channel DDR4 memory, up to 1TB of PCIe NVMe solid state storage, and features USB Type-C, USB 3.1 Type-A, HDMI, and SD card ports.

If you’re looking for something that packs a bit more power, the Acer ConceptD 7 has a similar display, but it’s available with up to a 9th-gen Intel Core i7 processor and NVIDIA GeForce RTX 2080 Max-Q graphics. It supports up to 32GB of RAM and has two SODIMM slots as well as a Thunderbolt 3 port.

It’s also about a millimeter thicker, and more than a pound heavier, at 4.6 pounds. And this model costs more, with a starting price of $2300.

Acer’s ConceptD 9 is technically a laptop in that it has a battery that lets you take it with you and use anywhere. But it’s a 9 pound laptop with a 17.3 inch display, so it’s kind of in a different category than its smaller siblings listed above.

It is also really pretty cool. The computer has a 4K display that you can use in laptop mode. But you can also pull the screen forward to use as an easel, making the computer feel a bit like a semi-portable Microsoft Surface Studio.

The ConceptD 9 comes with a Wacom EMR stylus that supports 4096 levels of pressure sensitivity.

Now for the bad news — this thing ain’t cheap. Acer says the ConceptD D9 will be available in June for $5000 and up.

Acer’s ConceptD lineup also includes the ConceptD 500 desktop PC which is coming in June for $1700 and the ConceptD 900 desktop which will launch in May for a crazy $20,000.

There are also a few new professional monitors coming this summer for $2000 and up.