The Acer Iconia Tab A100 is a 7 inch tablet running Google Android Honeycomb. We recently heard a rumor that Acer was working with Taiwanese device maker Compal to ramp up production and start shipping the tablet globally. Now it looks like US retailers are getting ready to start selling the Iconia Tab A100. 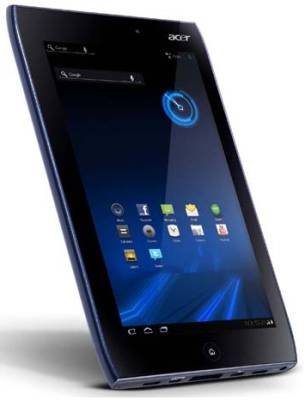 Excaliber PC is taking pre-orders for$329. Negri Electronics has a higher pre-order price tag of $390. Neither has a ship date for the tablet yet though. If you’re willing to pay way too much for the 7 inch tablet you can also try Overseas Electronics, a distributor that promises to acquire devices internationally and ship then to the US. The company is charging a whopping $600 for the Iconia Tab A100.

I’d take all of the pre-order pages with a grain of salt for now. You’ll notice the big players such as Amazon, Buy.com, and Newegg aren’t taking orders yet. Excaliber PC has a long history of creating product pages for computers before they’re officially launched. The retailer’s website for the Iconia Tab A100, for instance, includes at least one picture that shows Acer’s larger 10 inch tablet instead.

Still the order pages give us a few pretty pictures to look at, as well as official spec sheets. The Acer Iconia Tab A100 is expected to have a 7 inch, 1024 x 600 pixel capacitive touchscreen display, a 1 GHz NVIDIA Tegra 2 dual core processor, and Android 3.x operating system (the product listing says Android 3.0, but my money is on the tablet actually shipping with Android 3.2).

Update: Engadget reports the tablet will go on sale in the US in early August for around $300.