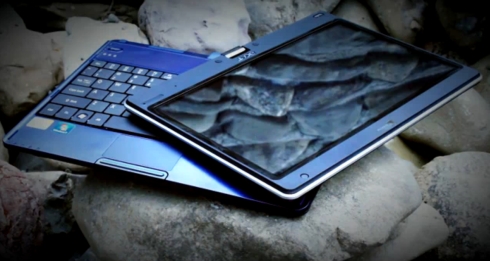 There’s a lot of excitement around the idea of affordable tablet PCs such as the upcoming iPad and dozens of other ARM-based tablets running Google Android or other Linux distributions. But tablets have been around for years — it’s just that most of them have fit Microsoft’s earlier vision of the tablet PC, which is a powerful laptop computer with a full sized keyboard and a touchscreen display that you can fold down over the keyboard for use in tablet mode — often with an active digitizer to enable handwriting recognition.

The Acer Aspire 1825PT tablet falls somewhere in between. It looks like a traditional Windows tablet, with a keyboard and touchscreen. And runs Windows 7. But it’s part of Acer’s budget thin and light laptop line and it features a capacitive touchscreen display that can handle multitouch input.

So what exactly do you use a tablet like the Aspire 1825PT for? It’s clearly meant for more than just surfing the web. And Acer a journalist has put together a 10 minute promotional video that gives you a good look at just what this computer can do — as well as an extended look at a bunch of rocks, for some reason.

For one thing, you can treat the Aspire 1825PT like a traditional laptop and set it on a tablet to get some work done. It’s a fully functional Windows 7 computer capable of running Office, Photoshop, and other work and productivity tools. You can also rotate the screen and hold the tablet in your hands while surfing the web, looking at images, or drawing pictures.

But more than 2/3rds of Acer’s promotional video focuses on the physical design of the computer rather than its capabilities. And I think there are two good reasons for that. First, most people already know what to expect from a Windows machine. And second, what they don’t expect is a bunch of touch-friendly applications, because truth be told, there aren’t really that many of them yet.

While there are tens of thousands of touch-friendly apps for the Apple iPad and Google Android tablets (because they were developed first for touchscreen smartphones), there isn’t the same kind of touch-focused ecosystem for Windows tablets yet. Basically, when you add a touchscreen to a Windows 7 computer you expect to be able to use all your usual Windows apps by tapping on them instead of using a mouse and keyboard — despite the fact that these apps were designed with a mouse and keyboard in mind.

And that’s a large part of the reason that tablets fitting the Microsoft model have remained niche products in recent years and why people are talking so excitedly about the iPad and similar tablets. But here’s the thing — if you’d prefer a single device that can function as a full computer and a tablet, a machine like the Acer Aspire 1825PT fits the bill and leaves you with one less gadget to carry around. I just don’t think they’ll sell in large numbers until we start to see more touch-friendly, iPhone-like apps designed to run on Windows tablets. I’m not saying we need an App Store for Windows touchscreen notebooks. We just need more apps.

You can check out Acer’s full demo video after the break.