Depending on how you look at it, the Acer DA241HL is an all-in-one desktop computer that runs Android, or it’s a 24 inch monitor with benefits. It’s basically a big screen with the guts of an Android tablet. But unlike most tablets, you can use it as a touchscreen display for your PC when you’re not busy using the system to play Angry Birds.

The Acer DA241HL showed up on our radar when it passed through the FCC last month, but now Acer is making it official. Acer’s 24 inch Android all-in-One will launch in October, with a European price of €429 and up. 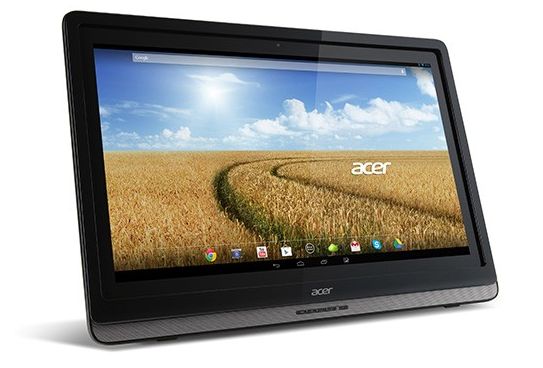 Acer is positioning the DA241HL as an all-in-one, and while it looks like a PC monitor, it has its own processor, storage, and operating system so that you can use it with or without a PC.

The system has an NVIDIA Tegra 3 quad-core processor and runs Android 4.2 Jelly Bean software. It features MHL connectivity, which lets you connect the display to a Windows PC using an HDMI or USB cable. Not only will this let you use the DA241HL as a display, it’ll function as a 2-point touchscreen display.

You can also adjust the position of the display so it has a tilt angle between 20 degrees and 75 degrees.