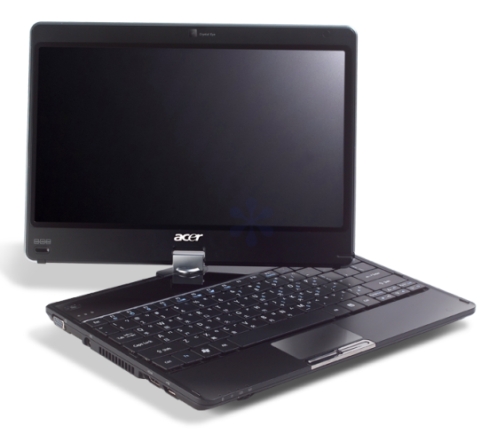 The Acer Aspire 1410 is a thin and light laptop that has a bunch of features you won’t find in an average netbook, including a high resolution 11.6 inch, 1366 x 768 pixel display, a 1.4GHz Intel Core 2 Solo SU3500 processor, and GMA X4500 graphics which can handle HD video playback. But there’s one thing the Acer Aspire 1410 doesn’t have: A touchscreen. For that, you’ll need to wait for the Acer Aspire Timeline 1820p, which Macles reports is on the way.

The Aspire 1820P will reportedly be the same size and have the same basic specs as the Aspire 1410 (which is also called the Acer Aspire Timeline 1810T in many parts of the world), but it will have a touchscreen display and a swivel that lets you fold the screen down over the keyboard for use in tablet mode.

The screen will support multitouch gestures and the computer will ship with Windows 7, which means it won’t be available until late October at the earliest.

Macles reports that it weighs about 0.67 pounds more than the Acer Aspire 1410, which means the Aspire 1820P will probably weigh around 3.8 pounds.