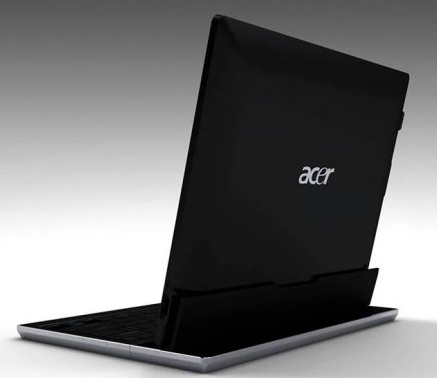 This morning Acer introduced 5 new laptop and tablet computers and two major pieces of software news. But here’s one item I wanted to take a closer look at: The 10 inch Windows tablet Acer is expected to launch early next year.

We don’t have complete specs for the computer, but we know it will have a 10.1 inch “high resolution’ display, measure about 0.6 inches thick, and weigh less than 2.2 pounds. The tablet will have WiFi and 3G, as well as twin 1.3MP cameras: one one the front, and one on the back.

The tablet will also come with a docking device with a full-sized keyboard, allowing you to use the tablet as a sort of convertible touchscreen tablet-style netbook.

Of course, Acer won’t be the first company to launch a 10 inch convertible tablet, not by a longshot. This little guy enters a space already populated by the Asus Eee PC T101, the Lenovo IdeaPad S10-3t, and the new Dell Inspiron Duo, among others. But there’s one thing that could really help the Acer tablet stand out: It will have a “next-generation” AMD chip.

I’ve noticed that most of the Windows tablets I’ve tested which are equipped with low power Intel Atom chips feel a little too sluggish to run Windows 7 properly in a tablet form factor. It appears you need a bit more power to properly handle features such as automatic screen rotation and accurate gesture support.

AMD’s latest chips though, offer much better CPU and graphics performance than a typical Atom chip. So I’m hopeful that the upcoming Acer tablets will be better equipped to run Windows 7. We’ll have to wait until February to find out… although I suspect Acer will probably have prototypes on display at CES in January.