The Acer Switch 7 Black Edition is a Windows tablet with a 13.5 inch, 2256 x 1504 pixel IPS display, a kickstand, a detachable backlit keyboard, and and a Wacom digitizer with support for a pressure-sensitive digital pen. 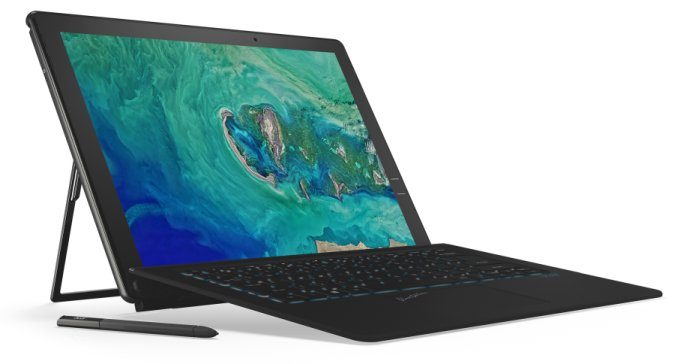 Acer says the tablet weighs about 2.5 pounds, although the keyboard will add a little weight. The Switch 7 Black Edition has a brushed aluminum body and an optical under-glass fingerprint sensor. It uses a battery-free stylus with support for 4096 levels of pressure sensitivity.

The Switch 7 Black Edition uses Acer LiquidLoop cooling, much like the company’s other recent Switch-branded 2-in-1 tablets, allowing the company to pack Intel Core U-series chips into fanless designs while some other PC makers have opted for lower-power Y-series (Core M) chips for their fanless offerings.

Still, the addition of NVIDIA graphics says as much about the low power consumption of the MX150 chip as it does about Acer’s cooling technology. NVIDIA says performance-per-watt for its entry-level chip is about 3 times better than its predecessor, the NVIDIA GeForce 940MX.

The Switch 7 Black Edition will be available in December for $1699 and up.