When Intel unveiled its Project Athena initiative last year, the company said the goal was to provide a set of guidelines for PC makers to meet in order to deliver a solid user experience for thin and light laptops and 2-in-1 computers with long battery life and responsive performance — but it turns out that it’s possible to meet those specs without charging $1000+ for it.

Case in point: Acer’s new Swift 3 (SF313-52/G) will sell for $699 and up when it hits the streets in March, and Acer says the 13.5 inch laptop was co-engineered with Intel as part of the Project Athena initiative. 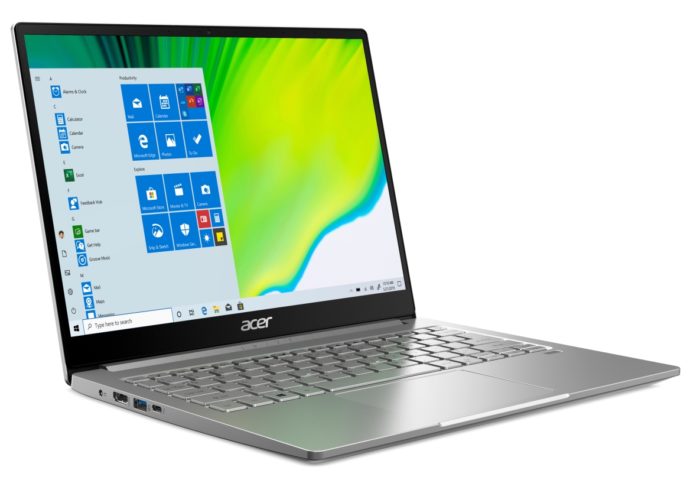 The notebook weighs 2.6 pounds and measures 0.63 inches thick. It has a 2256 x 1504 pixel display with a 3:2 aspect ratio display with an 83.65 percent screen-to-body ratio thanks to slim bezels around the screen. And Acer says the new Swift 3 laptop supports 100-percent of the sRGB color gamut.

Acer will offer the Swift 3 SF313-52/G with up to an Intel Core i7-1065G7 Ice Lake processor featuring Intel Iris Plus graphics and support for up to 16GB of LPDDR4X RAM and 1TB of PCIe NVMe solid state storage.

Entry-level models will be a bit less impressive though — the base specs for the new Swift 3 include a Core i3-1005G1 processor and just 128GB of storage.

Other features include a 56 Wh battery, backlit keyboard, a fingerprint sensor, wake-on-voice support that lets you talk to Cortana even when the laptop is in standby mode, and fast charging — Acer says you should be able to get up to 4 hours of battery life from a 30-minute charge.