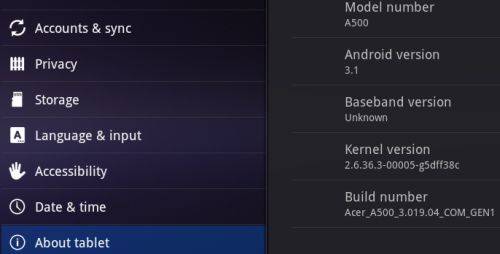 The Acer Iconia Tab A500 is a 10 inch tablet running the Google Android operating system. It initially shipped with Android 3.0, but the company has promised to update it to Android 3.1 — and leaked copies of the software updated have already hit the web. Now it looks like the official update is on its way.

Representatives from Acer Germany left several comments on Facebook today indicating that a phased rollout started today. Not all users will get the software update right away, but it should be coming to most Germany Iconia Tab A500 users soon.

There’s no word on when we’ll see the official software update in the US.

Google Android 3.1 brings a number of improvements including better support for hardware graphics acceleration, resizeable home screen widgets and an improved app switcher that lets you see up to 16 of the apps you’ve launched recently.

Update: Some users are having trouble installing the update, but it does appear to be rolling out globally.

via Netbook News and Android Pit