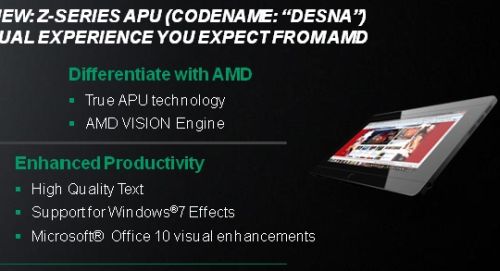 Acer may be one of the first companies preparing to launch a tablet with a new AMD Z-Series low power processor at its core. DigiTimes reports that Acer has placed orders for 80,000 of AMD’s newest low power chips.

The AMD Z-01 processor, code-named “Desna,” is similar to the AMD C-50 processor launched earlier this year, but it’s capable of running at lower speeds which allows AMD to offer an even lower TDP of about 6W.

The chipset is designed for tablets and other devices where long battery life and low power consumption are more important than high performance — although the chip can handle 1080p HD video playback and 3D graphics. The Desna chips are reportedly cheaper than Intel’s Oak Trail processors, which offers an opportunity for tablet makers to save some money. Since there are no Desna-based devices in the wild yet though, it’s tough to say how Oak Trail and Desna tablets will compare in terms of performance and battery life.

The AMD Z-01 is an x86 chip, which means you should be able to run Windows, Linux, Android, of other operating systems. According to DigiTimes, the Acer tablet will likely run Windows 7.

MSI is also expected to launch a Windows tablet with an AMD Desna chip soon.