Acer’s first Windows 10 smartphone is coming in February. The Acer Liquid Jade Primo is a 5.5 inch phone with a Qualcomm Snapdragon 808 processor, 3GB of RAM, 32GB of storage, and support for Microsoft’s Continuum for phones software, which lets you connect an external keyboard, mouse, and display to use your phone as if it were a desktop computer.

Acer has been showing off the phone for a few months, but now the company says it’s just about ready to go: you’ll be able to buy the Acer Liquid Jade Primo in the EMEA region (Europe, the Middle East, and Africa) starting in February. 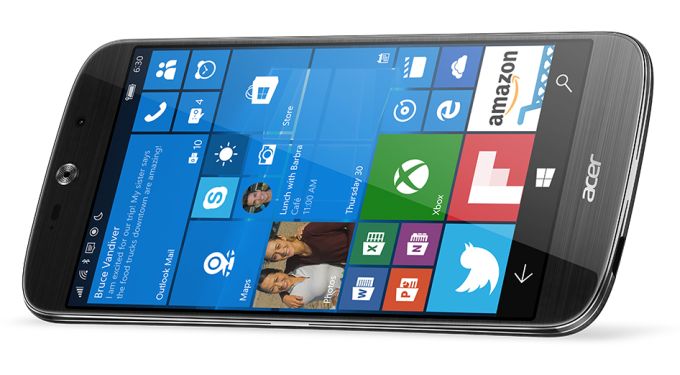 That makes the phone a little more expensive than rumors had suggested. But US pricing and availability hasn’t been announced yet. It’s possible the Liquid Jade Primo could sell for a lower price if and when it comes to the US.

Like Microsoft’s newest phones, the Liquid Jade Primo has a USB Type-C port which allows you to connect a wide range of peripherals including a mouse, keyboard, and display. Of course, there’s only a single port, which is why Acer will offer a Display Dock that lets you connect all that hardware with a single cable.

Once connected, you can continue to interact with mobile apps on your phone. But at the same time you can use Universal Windows apps like Word, Excel, Outlook, and the Edge web browser on your desktop display. The phone’s Start Screen functions like a Start Menu on the big screen, and there’s a taskbar for quickly navigating between different apps. You can only view one app at a time though: there’s no support for multi-window mode yet, and there’s also no support for legacy Windows apps. Continuum for phones only works with apps that use Microsoft’s new Universal apps platform.

Acer will offer several options for buying the phone: just the phone, the phone plus a Display Dock, or a “desktop kit” which comes with the Display Dock plus a mouse and keyboard.