The Acer Liquid Jade Primo is a smartphone with a 5.5 inch display, Windows 10 software, and support for Microsoft’s Continuum feature which lets you connect the phone to a keyboard, mouse, and display to run (some) desktop-style apps.

It’s one of the first phones from a company other than Microsoft to support Windows 10’s Continuum for phone software. But it’s taken a little while for the phone to reach the market. 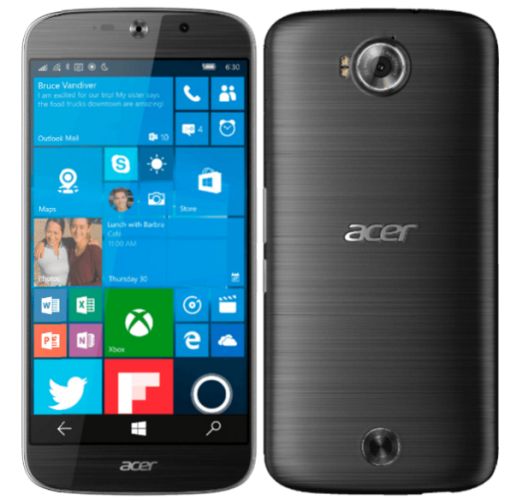 Acer unveiled the Liquid Jade Primo in September, 2015, showed it off at CES in January, 2016, and promised it would be available for purchase in February.

That didn’t happen… but now you can finally get the Liquid Jade Primo in Europe for about 599 Euros. Acer officials have said the company plans to sell the phone in the United States, but no launch date has been set yet.

The 599 Euro price tag includes a docking station which lets you connect the phone to a display, keyboard and mouse. Once you’ve done that, you’ll be able to treat the phone sort of like a desktop: Universal Windows Platform apps downloaded from the Windows Store will be able to run in full-screen mode on your monitor, allowing you to take advantage of the extra screen real estate.

In this mode, the phone’s Start Screen becomes a desktop-style Start Menu. There’s also a taskbar along the bottom of the screen. At this point Continuum doesn’t allow you to run older Windows apps designed for x86 processors and it doesn’t allow you to view multiple apps at once. Everything runs in full-screen mode.

But you can keep using your phone even while it powers a desktop experience. You can view one app on the phone and another on the monitor. And you can respond to phone calls or incoming messages on the big screen if you’d like.

The 5.5 inch Liquid Jade Primo has specs that are pretty close to those of the 5.2 inch Microsoft Lumia 950, including a Qualcomm Snapdragon 808 processor, 3GB of RAM ,32GB of storage, and a USB Type-C port.

But while Microsoft’s phone has a 2560 x 1440 pixel display, Acer’s has a full HD AMOLED display.

via Mobiflip and GSM Arena