As expected, Acer is giving its Chromebook lineup a special touch. The new Acer C720P Chromebook is the company’s first Chrome OS laptop with a touchscreen.

At $299.99, it’s also the cheapest touchscreen Chromebook released to date… which would be more impressive if the $1299 Google Chromebook Pixel weren’t the only competition.

The Acer C720P should be available from Amazon, Acer, and Best Buy starting in December. 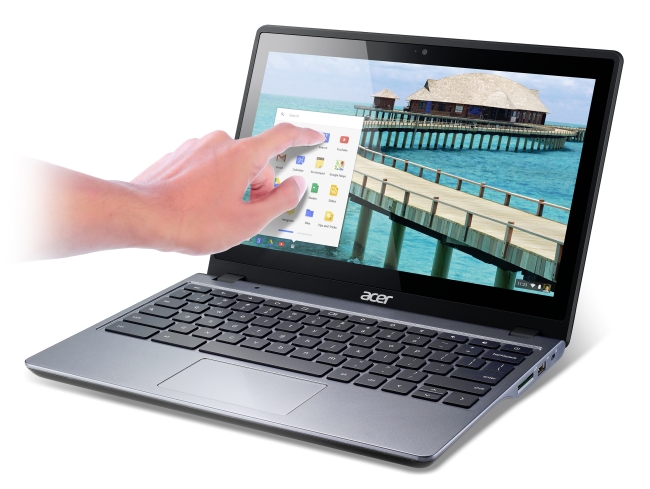 The laptop features an 11.6 inch, 1366 x 768 pixel touchscreen display, 2GB of RAM, 32GB of storage, and an Intel Celeron 2955U Haswell processor. Acer says it should get up to 7.5 hours of battery life and the laptop boots in just 7 seconds.

Like most other recent Chromebooks, this one comes with 100GB of free cloud storage with Google Drive for 2 years. Customers also get 12 free Gogo in-flight WiFi passes.

And like all Chromebooks, this is a laptop designed to run Google’s browser-based operating system. Chrome OS has come a long way in the last few years with support for a growing number of apps that can function even without an internet connection. But this isn’t a laptop for folks that want to run Microsoft Office or iTunes. Instead it’s designed for folks who are comfortable with Google Docs (or Microsoft Office Web Apps) and Google Play Music (or Rdio).

Still, it’s a relatively cheap laptop with a relatively speedy processor and the security that comes with an operating system that updates automatically and keeps apps either in the cloud or sandboxed to prevent malware from infecting your machine. Chromebooks aren’t for everyone, but at $300, the Acer C720p is certainly an attractive option for folks who are already sold on the Chrome OS platform.

10 replies on “Acer launches $300 Chromebook with a touchscreen display”