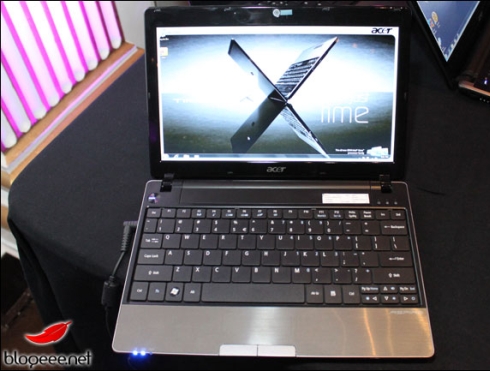 Acer has officially introduced the world to its TimelineX series of thin and light notebooks. The one I’m most interested in is the 11.6 inch model which will replace the company’s current line of Aspire 1810 notebooks. Blogeee got to spend some hands-on time with the new model, and while it looks a lot like Acer’s earlier 11.6 inch notebooks, there are some subtle differences.

The biggest change is that the new model sports a 1.07GHz Intel Core i5 U520 CPU instead of the Intel CULV chips that were used in earlier models. It’s not clear what impact, if any this will have on battery life, but Acer says you should be able to get up to 8 hours of run time from a 6 cell battery.

The notebook has an 11.6 inch, 1366 x 768 pixel display and what I’m coming to think of as the standard Acer thin and light keyboard. The touchpad features two distinct buttons and the lid and  palm areas have a brushed aluminum finish. Blogeee reports that the notebook measure between 22 and 28.9mm thick (about 0.86″ and 1.14″).

The new model has HDMI and VGA outputs, 3 USB ports, Ethernet, and mic and headphone jacks as well as a flash card reader. There’s a single large access panel on the bottom of hte laptop which should allow you to access the hard drive, memory, and Mini PCI-E card slot.