Acer has just unveiled one of the first smartphones that can serve double duty as a desktop PC. Just attach the phone to a desktop docking station and you can run apps on a big screen using a mouse and keyboard. Pick up the phone and you’ve got a mobile, touch-friendly user interface.

The Acer Jade Primo will ship with Windows 10 software, and it’ll be one of the first phones to use Microsoft’s Continuum for Phone software that enables seamless transition from mobile to desktop modes. 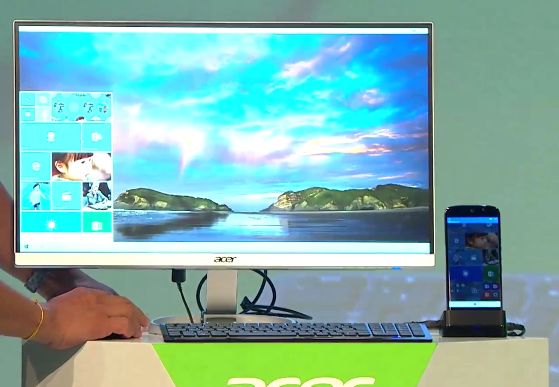 The phone features a Qualcomm Snapdragon 808 processor, a 5.5 inch AMOLED display, a 21MP rear camera, and an 8MP front-facing camera.

It’ll ship with a docking station, wireless mouse, and keyboard.

In a demo at the company’s IFA press conference in Berlin, Asus showed Continuum in action. Connect the phone to a dock and you can view a Windows desktop and start menu-style environment on an external display. Using a mouse and keyboard, you can open apps including Outlook, Excel, and Maps. Disconnect the phone, and the external display goes dark, but you can run mobile versions of the same apps on the phone itself.

Microsoft is also said to be working on its own smartphones that support Continuum, but the Lumia 950 and Lumia 950 XL haven’t officially been announced yet.

Acer hasn’t revealed a price, release date, or regional availability of the Jade Primo yet. The company only recently started selling its phones in the United States, and most of the models available in the US are entry-level phones. So I wouldn’t hold my breath waiting for the Jade Primo to arrive in the States. But I also wouldn’t be shocked if it does arrive.