Acer is adding two new premium models to its Chromebook lineup. The new Acer Chromebook 13 features a 13.5 inch, 2256 x 1504 pixel IPS display with a 3:2 aspect ratio and support for up to 16GB of DDR3 RAM and up to an Intel Core i3-8130U dual-core Kaby Lake Refresh processor.

The Acer Chromebook Spin 13, meanwhile, has the same display, but it adds a touch panel a 360 degree hinge that allows you to use the computer in notebook, tablet, tent, or stand modes, and Wacom EMR pen support. It’s also available with up to a Core i5-8250U processor.

Acer says the laptops will be available later this year, and pricing and configuration information will vary by region. 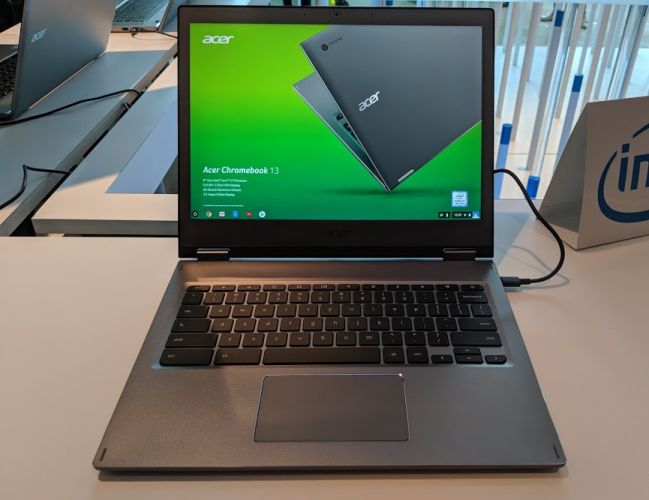 At first glance, the two devices look pretty similar. In fact, I only realized I was looking at the Chromebook 13 and not the Spin 13 when I tried touching the screen and nothing happened.

Both models have an aluminum chassis and both are the same size and weight, measuring 0.67 inches thick and weighing about 3.5 pounds. In fact, even the hinges aren’t all that different: you can push the screen back 180 degrees on the non-touch model, but it’ll stop before it flips all the way around.

But it’s likely that the non-touch model will have a lower price tag. Not only does it lack touch support, but it will be available with Celeron 3865U, Pentium 4415U, and Core i3-8130U processor options and tops out at 64GB of storage.

Other features include USB 3.1 Type-C ports for data or charging, as well as USB 3.0 and microSD card slots, support for 802.11ac WiFi and Bluetooth 4.2, and a touchpad with Corning Gorilla Glass on top.