The Acer Iconia Tab W700 is a tablet with an 11.6 inch, full HD display, an Intel Ivy Bridge processor, and Windows 8 operating system. We first saw the tablet in June, but now Acer has confirmed that it will be available on Windows 8 launch day on October 26th, with prices starting at $799.99. 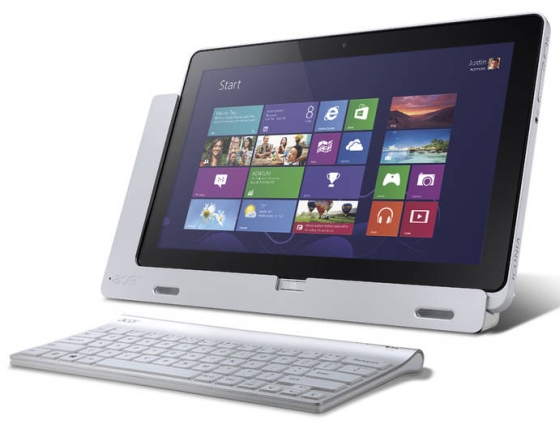 The tablet measures 0.5 inches thick and weighs about 2.3 pounds. That makes it a bit chunky and heavy by iPad standards, but the Iconia W700 is still smaller and lighter than most laptop computers — but it’s capable of performing most of the same tasks.

It’s powered by the Windows 8 operating system, which means that it can run finger-friendly tablet apps as well as pretty much any desktop app designed for Windows 7.

What makes the W700 stand out from most of the other Windows 8 tablets I’ve seen so far is the included cradle accessory that lets you use the tablet like a desktop.

Acer says the tablet resumes from sleep in 1.5 seconds, and boots in just 6 (which makes me wonder what the definition of “boot” is). The tablet is expected to get up to 8 hours of battery life.