The Acer Iconia W510 is a tablet with a 10.1 inch display, an Intel Atom Z2760 Clover Trail processor and Windows 8 operating system. Acer first unveiled the tablet in June, but now the company’s ready to talk about the price and launch date. 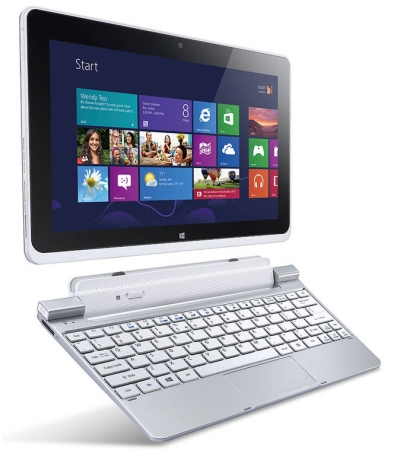 At that price you get a tablet with a 32GB solid state disk. Or for $749.99 you can opt for a model with a 64GB SSD and a keyboard docking station.

The tablet alone has a battery which Acer says is good for up to 9 hours of run time. Since the keyboard has a built-in battery, you can get up to 18 hours of battery life when the tablet is docked. The dock also has a full-sized USB port.

The $500 starting price is much better than the $800 figure Acer was throwing around in June. The Iconia W510 is one of the most affordable Windows 8 tablets I’ve seen so far — although plenty of companies have yet to reveal the pricing for their upcoming Windows 8 computers.

If you’re looking for something a little more powerful, Acer also plans to start selling the Iconia W700 on October 26th for $799.99 and up. That tablet features an 11.6 inch, 1080p display and an Intel Core i Ivy Bridge processor and a cradle and Bluetooth keyboard that lets you use the machine like a desktop.