The Acer Iconia Tab A510 is a 10 inch tablet with Android 4.0 and an NVIDIA Tegra 3 quad-core processor. First unveiled at CES in January, the tablet goes up for pre-order today in the US and Canada. 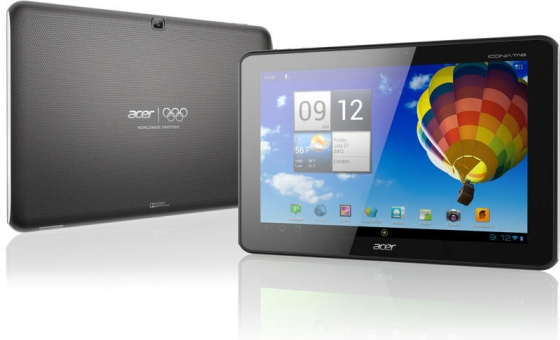 Prices start at $449.99 for a model with 32GB of storage. The model Acer is selling in the US and Canada is actually the Olympic Edition we first heard about a few weeks ago. In practical terms, all that means is that the international Olympics logo is on the back of the tablet, next to the Acer logo.

The Iconia Tab A510 features a 10.1 inch, 1280 x 800 pixel display, an 85-degree viewing angle, Dolby audio, and support for 1080p HD video playback. It has a micro HDMI output for displaying content on a TV or monitor, and a micro USB port for connecting to a PC.

The tablet has 1GB of RAM, 32GB of storage and a microSDHC card slot for up to 32GB of additional storage.

Acer says the Iconia Tab A510 should get up to 12 hours of battery life.

One reply on “Acer Iconia Tab A510 quad-core tablet launches in the US, Canada”