Acer unveiled a new 12.5 inch 2-in-1 tablet with an Intel Core M5 Skylake processor, a 3840 x 2160 pixel display, and a detachable keyboard in January. But the Acer Switch 12 S has another trick up its sleeve: support for an optional graphics dock that lets you use a discrete graphics card.

There wasn’t much information about the graphics dock in January, but now Chippy from NotebookCheck has spotted the dock at the CeBIT show in Germany and uncovered a few details. 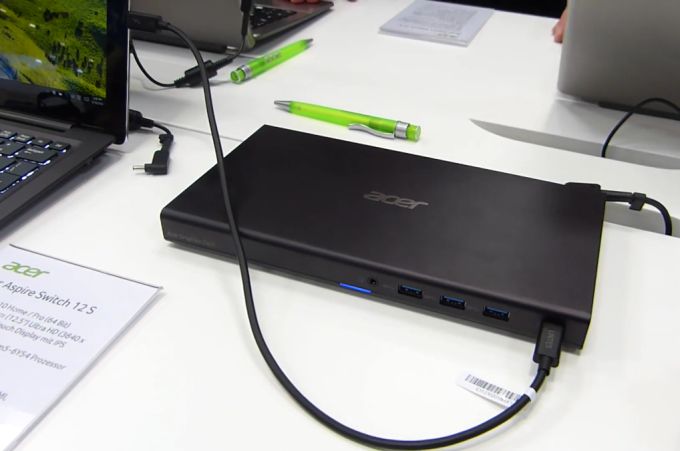 It connects to the Switch 12 S via a USB Type-C/Thunderbolt 3 cable which can be used for both data and power: plug the dock into a power source and connect it to the tablet and the Switch 12 S will charge through the USB cable.

While the GTX 940M graphics card isn’t exactly top of the line, it should boost graphics performance of the tablet when you want to play some games without permanently adding size or weight to the tablet. Just leave the dock at home when you don’t expect to need to do any gaming or other GPU-related tasks.

Chippy reports that the Acer Graphics Dock is expected to sell for about 300 Euros (including taxes). I haven’t heard anything about the US price or launch date yet.