Was the Motorola Lapdock ahead of its time (like the Palm Foleo before it)? Asus and Acer sure seem to think so.

While Motorola never sold as many of its smartphone accessories that let you use your phones as the brains of a laptop as the company may have liked, that hasn’t stopped Asus from releasing a series of “Padfones,” which turn your smartphone into a tablet or a laptop with the help of a docking station or two.

Now Acer is showing off a concept called Acer Extend which lets you run Android apps on a laptop-sized screen while using a laptop-sized keyboard and touchpad. 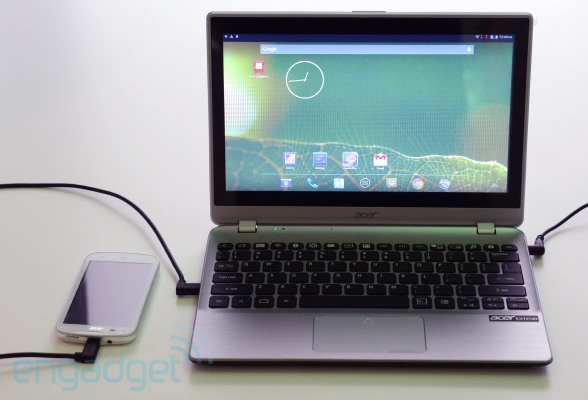 Basically, the Acer Extend prototype has the shell of a laptop, but it doesn’t have its own processor, memory, storage, or operating system. Instead, you connect your smartphone with a cable and your phone acts like the laptop’s brains, letting you use the device to surf the web, watch videos, play games, or use other Android apps on a bigger screen.

The prototype has a full-sized keyboard and a 6000mAh battery which you can use to recharge your phone while it’s plugged in.

There are also dedicated function keys on the keyboard which let you toggle WiFi and Bluetooth, launch the Mail app, and perform other functions.

Acer hasn’t yet committed to launching the Acer Extend, but it could be ready to go as soon as next year if the company decides to move forward.

7 replies on “Acer Extend turns your smartphone into a notebook”