Acer is adding a few new models to its Aspire Switch family of 2-in-1 tablets. The new Acer Aspire Switch 11 features a metal exterior, an Intel Core M Broadwell processor, and a new keyboard dock with a sturdier hinge which Acer says should keep the computer from wobbling when you use it as a notebook. 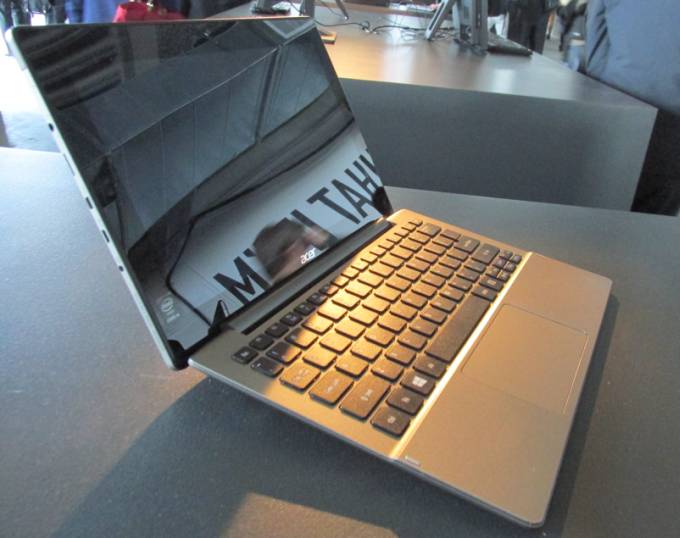 The company is also introducing a few nre configurations for its its Switch 10 line of 2-in-1 tablets.

The latest version of this 10 inch tablet with a detachable keyboard dock includes a second-generation Snap Hinge which Acer says offers better switching between notebook and tablet modes. The demo units I tested seem a lot like last year’s model, but that’s not necessarily a bad thing: I thought the original Switch 10 had a pretty decent hinge.

The tablet weighs about 1.4 pounds. Add the keyboard dock and you’ve got a 2.8 pound laptop.

Acer will offer models in a range of colors including black, white, pink, turquoise, and purple.

This model resembles the cheaper version, but has a 10.1 inch, 1920 x 1200 pixel IPS display and a Corning Gorilla Glass back cover much like the one Acer uses on its Aspire S7 line of ultrabooks.

Acer says this model is a tad lighter, at 1.3 pounds (or 2.64 pounds in notebook mode), and in some markets the company will offer an optional keyboard dock with a built-in hard drive.

This model supports an optional Acer Active Pen, which is sold separately, and Acer says the notebook features 2GB of RAM, up to 64GB of storage, and up to 7 hours of battery life from a 22 Wh battery.

Acer will offer the new Switch 10 in the US for $399 and up starting in August. And no, I don’t know why Acer decided to offer a premium model with half the battery life of the cheap model either.

Acer hasn’t announced the pricing or launch date for this model yet, but it has an improved hinge, improved audio, and an Intel Core M processor which should use less power while providing better performance than the Core i3 Haswell chip used in the Switch 11 model I reviewed recently.