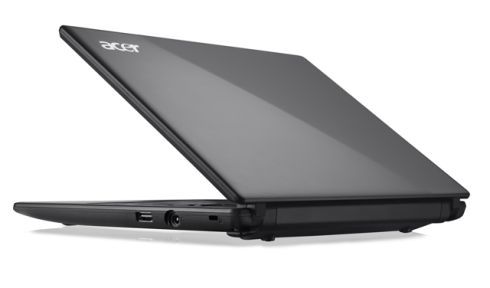 Next year Microsoft plans to launch Windows 8, and it will be the first desktop operating system from the company to officially support ARM-based chips as well as x86 processors from Intel, AMD, and others. That could open the door to very low power laptops which offer excellent battery life at very low prices.

But it will be up to PC makers to decide if and when to launch ARM-based laptops. Recently there was a rumor going around that Acer could launch an ARM-powered laptop as early as July. Clearly that didn’t happen, and if it had the computer would have had to ship with Google Chrome OS, Android, or another Linux-based operating system since Windows 7 doesn’t support ARM architecture.

Now Acer is saying that we probably shouldn’t expect to see any ARM-based laptops from the company until Windows 8 is released… which means early next year.

Charbax from ARMDevices.net got the info out of an Acer representative at the IFA show in Berlin this week. The news doesn’t mean that Acer won’t eventually launch a notebook with an ARM-based chip and Google Chrome OS or another operating system. Right now the company already offers the AC700 Chromebook with an Intel Atom chip. But so far no company has announced a Chromebook with a chip that wasn’t manufactured by Intel.

Earlier rumors had suggested that Acer’s first ARMbook would feature an NVIDIA Tegra 2 processor, but if we’re looking at an early 2012 launch, I’m guessing a next-generation chip such as NVIDIA’s quad-core Kal-El processor is more likely.

One reply on “Acer: Don’t expect an ARM-powered laptop until next year”