After introducing the Acer ConceptD 9 Pro laptop with an “Ezel Aero Hinge” last year, Acer is adding two new notebooks with this unusual hinge to its lineup,

The new Acer ConceptD 7 Ezel is a 15.6 inch convertible laptop with a hinge that not only allows you to use the computer in laptop or tablet modes, but which also lets you pull the screen forward so it hovers over the keyboard for use in as a digital easel. This model supports up to a 10th-gen Intel Core H-series processor (coming soon) and NVIDIA GeForce RTX graphics. It’ll sell for $2700 and up when it hits the streets later this year

Acer also has a higher-power model called the ConceptD 7 Ezel Pro which packs an Intel Xeon processor, ECC memory support, and supports up to NVIDIA Quadro RTX 5000 graphics. Prices will start at $3100 when this model hits the streets in July. 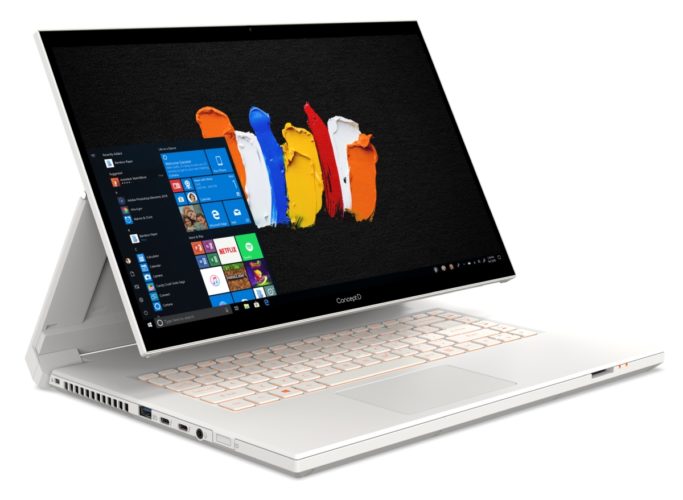 Both laptops feature 15.6 inch, 4K IPS touchscreen displays with 100-percent Adobe RGB color gamut and support for up to 400-nits of brightness. They come with Wacom EMR pens for pressure-sensitive input. And the screens feature Corning’s Gorilla Glass 6 for protection and an anti-glare coating to help with visibility under bright lights.

The ConceptD 7 Ezel supports up to 32GB of DDR3 memory and TB of PCIe solid state storage.

Other features include a fingerprint sensor, a glass touchpad, and a white chassis that features a “Micro-Arc Oxidation finish” that Acer says helps protect the laptop from corrosion, oxidation, and stains.

Acer’s new ConcepD 7 Ezel laptops are aimed at content creators, in case the design, specs, and high prices weren’t a giveaway. But at a time when it’s hard to make a notebook that stands out on specs alone (because every PC maker has access to the same CPU, GPU, and related tech), it’s interesting to see Acer continuing to offer a design that’s somewhat unique… even if it’s only for products that most folks aren’t going to pay for.

The laptops are also a bit on the hefty side, weighing in at 5.5 pounds, and measuring 14.1″ x 10.2″ x 1.2″. While that makes them a little tougher to lug around than the thin-and-light systems that have become increasingly common in recent years, I’m willing to give Acer a bit of a pass on this one since I suspect the extra weight will probably help keep the laptop firmly in place when you’re using it in easel (or Ezel, I guess) mode.