Acer plans to add at least two more Chrome OS laptops to its lineup this year, and both will use low-power processors to offer long battery life. 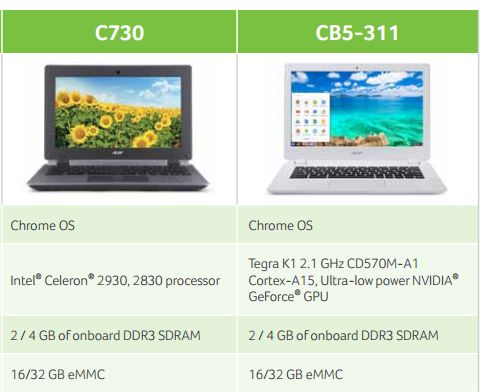 We’ve seen clues that these notebooks were in the works, but now more details are available thanks to an Acer 2014 business solutions brochure. It also mentions Acer’s first Chromebox, which should also launch in the second half of 2014.

Update: Acer seems to have removed mentions of the CB5 and C730 Chromebooks from the product brochure.

Here’s what to expect from the new laptops when they launch later this year:

This model features NVIDIA’s ARM Cortex-A15 quad-core processor with 192-core graphics. It will be available with 2GB to 4GB of RAM and 16GB to 32GB of storage.

Other features include 802.11ac WiFi, 2 USB 3.0 ports, and a 48Whr battery which will offer up to 14 hours of run time on the model with the HD screen or 12 hours of battery life if you get the version with the full HD display.

It has an HDMI port and Acer will offer accessories including USB-to-LAN and HDMI-toVGA adapters.

The Acer CB5 Chromebook measures about 12.9″ x 9″ x 0.7″ and weighs 3.3 pounds. It’s not the smallest or lightest Chrome OS laptop around, but it might just offer longer battery life than any other model.

Acer has offered a number of Chromebooks with Intel Celeron processors, but up until now they’ve all featured chips based on Ivy Bridge or Haswell technology. The new Acer C730 Chromebook will come with a choice of Bay Trail chips.

Like the Haswell-based Acer C720 Chromebook, these new models should get around 8 hours of battery life. But they’ll do that with a smaller, 36 Whr battery pack (the Acer C720 has a 45 Whr battery).