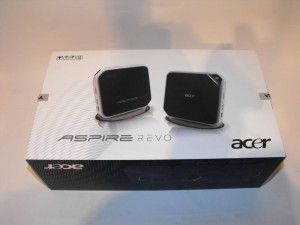 The Acer AspireRevo is the first computer shipping to use the NVIDIA Ion platform which pairs an Intel Atom CPU with an NVIDIA GeForce 9400M graphics processor. I mean, sure… it’s not shipping in the US yet. But it is available in Germany, where Johannes from NewGadgets.de got a chance to pick one up and post some unboxing photos.

The ION platform provides enhanced graphics performance for watching HD video, decoding Blu-Ray discs, or playing some video games. NVIDIA promises that additional companies will begin releasing computers built around the platform in the coming months. There’s a rumor going around that Asus and MSI will not be among them. But I’m hoping at some point we’ll see a company decide to use the ION chipset in a netbook to help differentiate their mini-laptop from the sea of computers with the same specs. Because I’m getting really tired of typing “1.6GHz Intel Atom N270 CPU, 1024 x 600 pixel screen, 1GB of RAM, and 160GB hard drive. “

4 replies on “Acer AspireRevo shipping in Germany, unboxed in Germany”