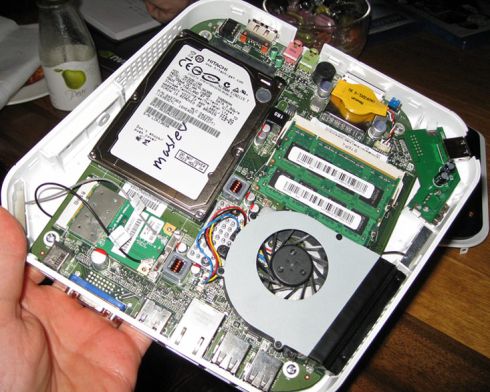 The Acer AspireRevo is the first computer to use the NVIDIA Ion platform, which bundles a low power Intel Atom CPU with an NVIDIA GeForce 9400M GPU. The result is a low power computer that can handle high quality graphics — sometimes.

Engadget spent a few weeks reviewing a pre-release unit, with mixed results. In a nutshell, the NVIDIA GPU does exactly what you’d expect. It handles Blu-Ray video and other 1080p content flawlessly — as long as you’re using a media player that supports GPU hardware acceleration. For instance, powerDVD plays back 1080p QuickTime movies without complaining. But QuickTime doesn’t.

What’s worse, while you’d think that Blu-Ray decoding would be harder than playing back Flash video, right now Adobe Flash isn’t designed to let the GPU do the heavy lifting. And that means that while you can watch 1080p videos from a disc drive or the hard drive, standard definition web video playback is choppy.

I noticed a similar problem when reviewing the Eee Top all-in-one computer with an Intel Atom CPU and a 1366 x 768 pixel display. While the Intel Atom N270 CPU can handle full screen Hulu or YouTube video on a 1024 x 600 pixel display, it struggles with higher resolutions.

In other news, the folks at Bit-Tech took a bit of initiative at a recent Acer event and dissected an AspireRevo to see how easy it would be to upgrade. The verdict? You can slap in up to 4GB of memory and a hard drive as large as you like. You can also use an internal PCIe slot ofr expansion if you’re willing to sacrifice the WiFi capabilities. Unfortunately, none of these things is likely to improve Flash video performance. But Adobe and NVIDIA are reportedly working together to accomplish that.