Acer’s Aspire E11 and V11 notebooks weigh less than 3 pounds, sell for around $250 to $400, and feature fanless designs thanks to their low-power Intel Bay Trail processors.

But when I mentioned that I’m in the process of reviewing one of these little laptops, one of the first things readers started asking me is whether it’s possible to upgrade the memory and storage. 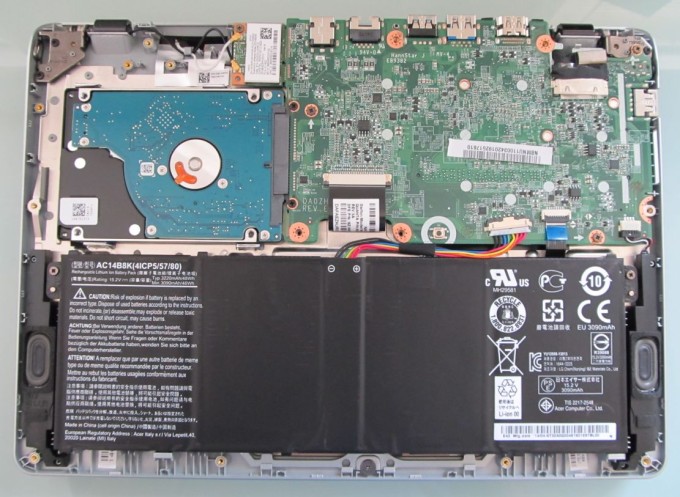 There are 13 screws on the bottom of the laptop. Remove them all and the cover pops off easily, giving you access to the battery, storage, and wireless card.

You’ll notice that the RAM is nowhere in sight — you’ll need to pop out some more screws, remove the LCD cable, battery cable, keyboard cable, touchpad cable, and speaker cable and then pop out the motherboard to get at the RAM on the other side.

I didn’t do that, because Acer was kind enough to loan me this laptop for review and I’d like to send it back in reasonably good condition (I’m not 100 percent confident in my ability to re-attach all of those cables properly). But you can find more photos in the gallery below or check out a complete disassembly guide from MyFixGuide.com.

The easiest things to upgrade or replace would be the hard drive or wireless card. Just pop out a single screw and you can replace the wireless card. Take out a few more screws and lift the edge of the motherboard a bit and the slim 2.5 inch hard drive will slide out, allowing you to replace it with another HDD or a faster solid state drive.

If you do decide to upgrade the memory, note that there’s only a single slot. The Intel Celeron and Pentium Bay Trail chips used in various configurations of this laptop should be able to support up to 8GB of RAM though, which is more than Acer offers. Most configurations of the Aspire E11 and V11 laptops come with 2GB or 4GB of memory. 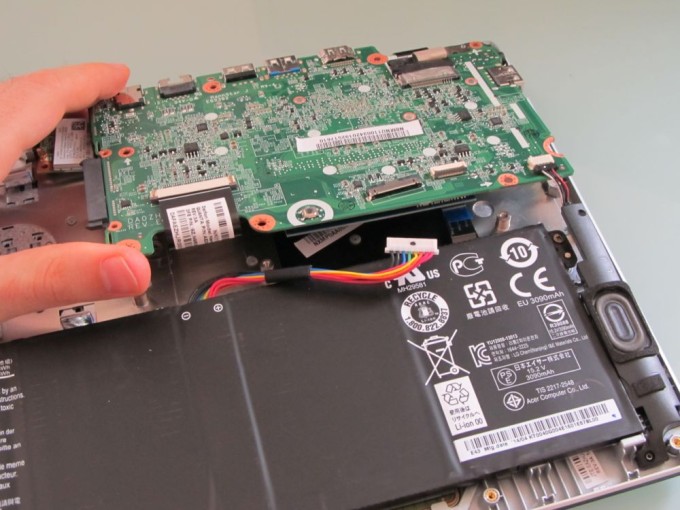 The battery doesn’t appear to be a common size, but you might be able to find a replacement part if you look hard enough. The model I’m testing has a 46Whr or 48Whr  battery, but the cheaper E11 notebook taken apart by MyFixGuide has a 30Whr battery — so if you’ve got one of the cheaper systems with a smaller battery it might be possible to upgrade the unit by using a battery designed for the higher-end V11 laptops. It’d probably be cheaper just to buy the more expensive model — even the priciest Acer Aspire V11 sells for just $369.

Still, it’s nice to know that folks in the market for a cheap, fanless laptop who were disappointed by the use of a hard drive instead of a solid state drive can easily swap out the storage.