The Acer Aspire S3 is one of the grandaddy’s of all ultrabooks. Acer introduced the first model way back in the fall of 2011. Since then the company has upgraded the S3 a few times by offering faster processors and other improvements, but the higher-priced Acer Aspire S7 has gotten more love from Acer designers.

Now the company is bringing a little more style to the cheaper S3 ultrabook line… as well as a bit more power. 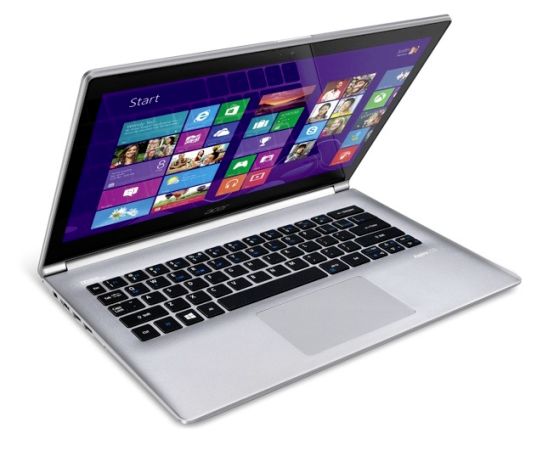 While the S3 isn’t quite as slim or light as the S7, it’s still a pretty sleek little notebook, measuring 0.7 inches thick, and weighing 3.6 pounds. That’s not bad for a notebook with a dedicated graphics card.

Acer’s new Aspire S3 has an aluminum case and a “sparkling white mirror-polish finish,” which is another way of saying it has a glossy lid. But the anodized aluminum body should make for a pretty sturdy and light-weight portable notebook.

The ultrabook features a 13.3 inch, 1920 x 1080 pixel IPS display with 170 degree viewing angles, Intel WiDi wireless display, the ability to resume from sleep in as little as 1 second, and up to 1TB of hard disk space.

Acer hasn’t announced US pricing for the Aspire S3 yet, but Engadget reports that it’ll start at €999 in Europe, making it about €450 cheaper than an Aspire S7.