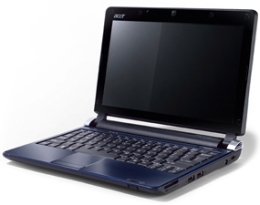 Acer has begun selling the Acer Aspire One D250 in the Philippines for 23,995 Pesos, or about $508. That’s about the same price that the computer was fetching in pre-orders in Japan a few weeks ago, so while I haven’t seen any US or European pricing yet, I’m guessing the D250 won’t cost more than $500 in the western hemisphere.

The Acer Aspire One D250 has a 10.1 inch, 1024 x 600 pixel display and a 1.66GHz Intel Atom N280 processor. It sports 1GB of RAM, a 160GB hard drive, 802.11b/g WiFi, Bluetooth, and either a 3 or 6 cell battery. In other words, it’s a lot like the previously released Acer Aspire One D150, but with a slightly faster processor. Electronic Pulp reports that Acer will begin phasing out the D150 to replace it with the D250, much the same way that Asus has replaced the Eee PC 1000H with the 1000HE, a remarkably similar computer featuring minor upgrades like a faster processor, new keyboard, and better battery.