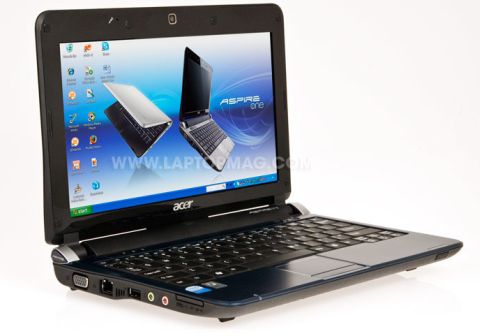 In many ways, the Acer Aspire One AOD150 is the same machine as the original Aspire One netbook. Both feature 1.6GHz Intel Atom processors and 1024 x 600 pixel displays. But while the first Aspire One models to hit the market had 8.9 inch displays and 3 cell batteries, the AOD150 which launches this week has a 6 cell, 4 or 5 hour battery and a 10.1 inch display. It also comes with 1GB of RAM, Windows XP, and a 160GB hard drive. Best of all, it has a starting price of $349. But how does the new netbook from Acer stack up against the competition?

The folks at Laptop Magazine have had a few days to play with one, and they seem pretty impressed. The machine weighs 2.8 2.95 pounds, which is a bit heavier than the HP Mini 2140, but still lighter than the Eee PC 1000H. The keyboard is pretty much identical to the one on Acer’s 8.9 inch laptops, which means it’s good for a computer with a 9 inch screen, but not great for a 10 inch model.

It looks like Acer has made it easy to upgrade the RAM, hard drive, and even the WiFi card thanks to some easy access panels on the bottom of the unit.

Laptop Mag did have some questions about the battery life. The rview unit came with a 5800mAh battery, but Acer says the computer will ship to consumers with a 4400mAh battery which probably won’t get the same kind of steller battery life.

For $349, the Acer Aspire One AOD150 looks like a good deal. But as we’ve pointed out before, it’s not necessarily the most professional looking netbook around. And if you need a large keyboard, you might be better off looking at an Asus, HP, or Samsung model.